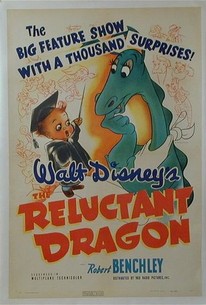 Comic legend Robert Benchley visits the Walt Disney Studios, hoping to talk Uncle Walt into creating a film based on Kenneth Grahame's The Reluctant Dragon. Along the way, he receives a behind-the-scenes tour of the animation process in this lively mixture of live-action and animation.

Robert Benchley
as Himself

Ward Kimball
as Himself

Walt Disney
as Himself

Florence Gill
as Herself, Voice of Clara Cluck

Frank Churchill
as Himself

Fred Moore
as Himself

Clarence Nash
as Himself, Donald Duck's Voice/Animator
View All

Critic Reviews for The Reluctant Dragon

Any fan of the Disney of yesteryear will love The Reluctant Dragon despite its questionable and outdated cultural references.

Every second is hilarious, using the limitless boundaries of animation to stretch reality, plausibility, and reasoning for extra laughs.

Excellent glimpse into how animation was made in the '40s.

This isn't really so much a movie as it is just an excuse to show the movie-going audience some of what goes into making an animated film. And you know what? That's absolutely fine by me.

One of the most fascinating, irregular curios in all the cobwebby corners of Disney history.

Audience Reviews for The Reluctant Dragon

So...I found out that this film exists; for some reason. It's not why the film actually exists that bugs me, because it works well as an educational tool for the general public, and shows us what happens at the Disney animation studios. No, what remains baffling is why they chose to make the film in this way. It could have been a quick documentary, but instead they decided to slap together a mélange of several different shorts, live-action footage, and a weird ending that supposedly remains the eponymous start to the film. It's just an odd kind of gem that Disney can still look to now that their projects are becoming less innocent over time. The film starts with radio personality Robert Benchley and his wife discussing a book their nephew wrote, which she wants to be made into an animated short. Benchley doesn't want to, but is forced into taking a meeting with Walt Disney himself. While being rallied around the studio by a Nazi youth looking assistant, Benchley slips away and explores the studio himself. We get to see different frames being put together to make a film, much like a flip book, sound effects for a short about a train, the coloring for another with Daffy Duck, (which includes voice actor Clarence Nash in all his splendor) and another short with Goofy. Benchley is always in wonder when he sees something new, and though most of the technology is dumbed down for the audience, and the environment is definitely more family friendly than in reality, it was nice to see these forties' staples onscreen. The ending contains the short, which was made while Benchley was supposedly wandering around the studio for forty minutes. The short itself is horrible. The dragon is an effeminate stereotype of a fop, who doesn't want to fight, yet pretends to with a knight so the knight can seem powerful, and all the villagers will think the dragon is tamed. Nothing entertaining about it, and the insensitivity exhibited by Disney yet again was not appreciated. Otherwise it's a cute little movie about the wonders of animation, which even kids nowadays can watch with a sense of wonder.

A fascinating behind the scenes look at some of the animators from Disney's Golden Age.