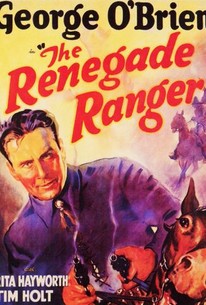 The old west collides with the new in this fine remake of RKO's 1932 Come On, Danger!. Or, rather, veteran RKO star George O'Brien is at odds with his eventual successor at the studio, Tim Holt -- at least part of the way. They play Texas Rangers assigned to bring in suspected murderess Judith Alvarez (Rita Hayworth). But young Holt, who gets himself fired for an altercation in the local cantina, defies his older colleague and instead joins Judith's band of renegades. O'Brien is sympathetic to Judith's claim that local political boss Ben Sanderson (William Royle) is usurping the local ranches by means of phony taxes, but maintains that the girl must make her argument in court. In the end, the greedy Sanderson shows his true face and Judith and her vigilantes are found innocent of all charges. In between the action -- which is fast and plentiful -- resident RKO balladeer Ray Whitley yodels "Move Slow, Little Doggie" by Willia Phelps, and Cecilia Callejo, as Holt's love interest, performs a Mexican dance. Borrowed from Columbia Pictures, a ravishing Rita Hayworth is not the usual placid prairie flower but takes an active part in all the ridin' and shootin'. After all, as her character explains, "I wouldn't have my men do anything I wouldn't do." Renegade Ranger was filmed a third time by RKO in 1943, under its original title, Come On, Danger!, and starring Tim Holt, now a full-fledged B-Western star. ~ Hans J. Wollstein, Rovi

Critic Reviews for The Renegade Ranger

There are no featured reviews for The Renegade Ranger at this time.