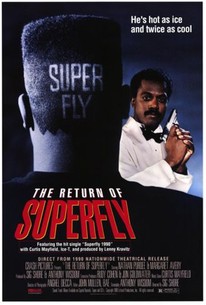 In this actioner, Eddie Baker is brutally murdered by drug dealers. Later expatriate, reformed drug-dealer Superfly is conned into returning to the US from Paris by federal drug agents. He then must let his former cronies know that he wants back into the drug business. Superfly hasn't been a dealer for over twenty-years, and doesn't realize that drug dealing has become a deadly game. His sudden reappearance rouses the suspicion of the two crooked cops controlling the city's drug flow. They are unsure which side of the law he is on and are not anxious to allow him a piece of the action. Fortunately for "Fly" a good buddy fills him in on modern drug trafficking. He decides to go back to Paris, but then the US agents force him to change his plans. Later Superfly is beaten by the drug lord's men and his lady friend is shot. Now nothing will prevent the enraged hero from getting his revenge.

Douglas Wade
as Bartender
View All

Critic Reviews for The Return of Superfly

There are no critic reviews yet for The Return of Superfly. Keep checking Rotten Tomatoes for updates!

There are no featured reviews for The Return of Superfly at this time.

The Return of Superfly Quotes