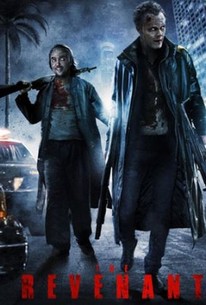 This breakout horror comedy centers around a fallen soldier who somehow finds he has joined the ranks of the living dead. Bart Gregory (Anders) has just recently been laid to rest - so why is he still up and walking around? The only person Bart can turn to for answers is his best friend Joey (Wylde), and before long the two pals have surmised that blood is life. In order to survive, Bart requires a steady supply of it. Convinced that no one will miss the drug dealers and killers who have transformed LA into a swirling cesspool of crime and vice, the two friends decide to do law enforcement a favor by cleaning up the streets while collecting the precious blood needed to keep poor Bart from withering away into dust! -- (C) Official Site

News & Interviews for The Revenant

View All The Revenant News

Critic Reviews for The Revenant

The film is a solid 15 minutes longer than it really needs to be and more annoying, The Revenant feels as though it longs to be an American riff on Shaun of the Dead.

It's not hard to imagine this becoming a cult favorite.

About 30 minutes too long and somewhat clumsily executed, this zombie's-eye-view story still manages to evoke the comic and splattery spirit of the best '80s cult horror flicks.

Its anti-war sentiments are trafficked in like a subterfuge that blows up with unexpected force.

D. Kerry Prior's limited experience mostly lies in SFX, but you wouldn't know it from what is perfect comedy timing.

one of the more unique approaches to such a story

The Revenant is a refreshing spin on the vampire/zombie genre and a true hidden gem.

The Revenant is full of life and displays magnificent story telling from both a writing and directorial sense. It is one of the smarter horror comedies created in the past few years and well worth a watch.

It's the best successor to Cemetery Man out there, for sure (much better than Dylan Dog!).

Ghoulishly repetitive and gore-laden, it's a flimsy fright farce that eventually becomes the walking dud.

Audience Reviews for The Revenant

A wildly uneven movie that works for the most part, with some really well pulled gags and others which are just a big miss. Worth a shot.

I am so happy to have seen this! This was the best film I saw at Toronto After Dark. For all those out there that are sick to bloody death (heh) of romantic touchy-feely vampire movies (whose titles rhyme with "skylight"), this is the film for you. A guy who wakes up on the night of his funeral to find that he's some sort of articulate zombie and makes his way back to his best friend's house. From there the pair piece together thier situation and do thier best to keep Bart "alive". Chris Wylde and david Anders have such great onscreen chemistry and it's very easy to believe that they're old friends. The effects are great, the jokes land squarely and the premise itself is wonderful. My only complaint might be that it stops being a comedy at one point, becomes full-on horror and never really comes back from the dark side. The very ending is pretty funny though, and I really can't wait to see this again when it comes out in theatres. I really really hope it gets a theatrical release. This is sure to become a cult hit.