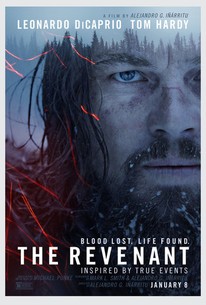 Critics Consensus: As starkly beautiful as it is harshly uncompromising, The Revenant uses Leonardo DiCaprio's committed performance as fuel for an absorbing drama that offers punishing challenges -- and rich rewards.

Critics Consensus: As starkly beautiful as it is harshly uncompromising, The Revenant uses Leonardo DiCaprio's committed performance as fuel for an absorbing drama that offers punishing challenges -- and rich rewards.

Critic Consensus: As starkly beautiful as it is harshly uncompromising, The Revenant uses Leonardo DiCaprio's committed performance as fuel for an absorbing drama that offers punishing challenges -- and rich rewards.

Inspired by true events, THE REVENANT is an immersive and visceral cinematic experience capturing one man's epic adventure of survival and the extraordinary power of the human spirit. In an expedition of the uncharted American wilderness, legendary explorer Hugh Glass (Leonardo DiCaprio) is brutally attacked by a bear and left for dead by members of his own hunting team. In a quest to survive, Glass endures unimaginable grief as well as the betrayal of his confidant John Fitzgerald (Tom Hardy). Guided by sheer will and the love of his family, Glass must navigate a vicious winter in a relentless pursuit to live and find redemption. THE REVENANT is directed and co-written by renowned filmmaker, Academy Award (R) winner Alejandro G. Iñárritu (Birdman, Babel). (C) Fox

Will Poulter
as Jim Bridger

Timothy Lyle
as Gordon in Shack

News & Interviews for The Revenant

View All The Revenant News

Critic Reviews for The Revenant

Ultimately, The Revenant suggests no deeper or more nuanced truths than a medieval morality play.

Iñárritu continues move away from his earlier work, which I still prefer, to bring a more Hollywood-digestible tale like this one that blends themes of spirituality, primal instinct and humanity.

As a feat of filmmaking chutzpah, it's one of 2015's most intriguing offerings.

[A] grueling but engrossing tale of survival and revenge in the American frontier.

Making 'The Revenant' was an ordeal, you see, in which people froze and suffered and came to blows, and they'd like to pass the ordeal on to you, the viewer.

As it is, you're bound to be impressed by what the actors went through, but you won't be so bothered about the characters they play.

Visually gorgeous with superb acting. Shooting on location engrosses viewers into this environment.

The "extremism" and historical exoticism of The Revenant ... are substitutes for confronting the basic facts of modern life.

The Revenant is a series of conventions writ large, like a 90s Mel Gibson thriller projected on a mountainside. Such a flimsy underpinning for such aesthetic grandeur can only collapse quickly.

In favor of nonstop, mesmerizing technical achievements, the film fails to be anything more than a series of striking images.

Hand-held cameras and fantastic use of the full frame leave you as disorientated as the characters, never sure where the next arrow or attacker will come from, or where the camera might go next.

Audience Reviews for The Revenant

Exceptionally beautiful direction and screenplay by Iñárritu. Superb cinematography. Poignant soundtrack. Brilliant performances (although Hardy's mumbling was difficult to discern oftimes). Fantastic costumes and sound. There's nothing not to love about this graceful, poetic and haunting film.

After being attacked by a bear, Hugh Glass must survive the perils of the wilderness and avenge the murder of his son. Brutal and raw, Leonardo DiCaprio's incredible performance deserves all its accolades, and Alejandro Gonzalez Inarritu is at top form, crafting an adventure that I wish more blockbusters would imitate. There's real tension in the conflicts, and the action scenes aren't jump-cutted to incomprehensible death. The second act is a little long, and I could've done without so many shots that jerk off to trees and sky. Overall, one of the best films of the year, this is a great adventure story.

Knowing this is an Inarritu film, I assumed the Directing and Cinematography would carry a lackluster story to make for a decent film. The story, however, very much held its own with the outstanding Directing and Camerawork, not to mention the great performances by DiCaprio and Hardy. This movie turned out to be a great and very well rounded thriller.