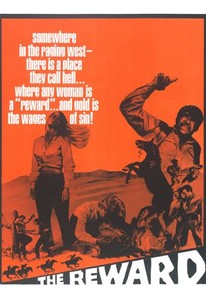 Director Serge Bourguignon coadapted the screenplay for The Reward from a novel by Michael Barrett. Efrem Zimbalist Jr., usually cast on the right side of the law, is here a fugitive from American justice hiding from a murder rap in Mexico. Zimbalist and his girlfriend Yvette Mimieux try to avoid those who'd like to collect the $50,000 dead-or-alive price on his head. Police chief Gilbert Roland captures Zimbalist alive, promising to divvy up the reward with his men. But the police officers greedily turn on each other, leaving the audience to sort out for themselves just who's the real "bad guy" hereabouts. ~ Hal Erickson, Rovi

Critic Reviews for The Reward

Five men are on the track of a sixth with fifty thousand dollars on his head: with deserts, thirst, deluges, illness, vultures, shootings, lost horses, and a plot so tangled it seems hopeless trying to unravel it.

There are no featured reviews for The Reward at this time.