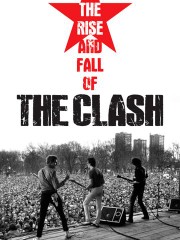 The Rise And Fall Of The Clash

The Rise And Fall Of The Clash Reviews

Charles H
½ November 18, 2018
A word of warning to anyone drawn to this film based on the title: don't believe it. This documentary isn't about the "Rise" of The Clash at all, and is only loosely focused on the "Fall." The majority of this oddly edited together film occurs after the band has been left in tatters. I think? I write that because the accounts being related by the various talking heads on-screen appear to move backward and forward in time, without a clearly identifiable timeline. I also wasn't sure exactly what qualified many of the interview subjects to speak on The Clash - a brief introduction to each person speaking would have been helpful. The film's greatest accomplishment is that Mick Jones is featured, but I have to believe his interview was heavily edited down, since he isn't talking about the music the band created, but rather, variously occurring, behind-the-scenes rancor, and therein lies the problem with this film. The music they created together doesn't appear to be the film's concern at all - for example, "London Calling," is mentioned one time that I counted - and insights about what it was like to create and play the band's songs was chief among the reasons why I chose to view the doc in the first place. An inordinate amount of time is spent on the band's final album, which all involved are in agreement was a mess, with way more screen-time devoted to interviews with members who joined after the fateful Shea Stadium concert than is necessary. Another of my chief complaints is that Topper Headon and Paul Simonon are completely missing from the documentary, while Joe Strummer's perspective is also puzzlingly glossed over. I know there are tons of recordings of Strummer speaking about The Clash and other subjects. Other voices either try to speak on behalf of the absent band members, or point fingers accusingly -- toward Joe, in particular. About half-way through, the film shifts gears and nearly loses sight of the band that is supposed to be its focus. Svengali-like figure, Bernie Rhodes, who was the band's manager for the majority of its history, becomes the central character at this point, with the minutes dragging on as interviewees talk about his destructive decisions and the rivalry with Jones, as they paint Strummer as an easily manipulated victim of success. The incredible music of The Clash isn't just an afterthought, it's ignored almost entirely. When I watch a documentary, I expect to learn something new about the subject being detailed. Based on "The Rise and Fall of The Clash" alone, the band and its legacy remain well out of reach. The great documentary chronicling the band once dubbed, "The Only Band That Matters," might not yet have been made. Instead of spending time with this one, I instead would recommend Julien Temple's excellent Joe Strummer documentary, "The Future is Unwritten."

Rik H
½ June 10, 2014
Almost unwatchable. Spent over half the film on the last two years without Mick Jones.

Matthew S
½ May 12, 2014
Talked more about the last years of their career & hardly talked about their great records (first 3 in my opinion). Most of the film is about Bernie Rhodes their manager.

Graham J
February 1, 2014
Probably the best Clash retrospective. The first part of the film squeezes in the bulk of their era whilst the latter half focuses on the three years that led up to their demise.

Features contrasting views and includes witnesses that have never been interviewed before. Suffers from the same old voices making the same old populist points.

Director Danny Garcia avoids an overdosed critique by concentrating on witnesses and participants rather than the disgruntled or tired media hacks.

There's a lack of a clear timeline but this is a minor point. There is also no reference to Top Risk Action Company or to the slate of songs that were replaced on the final album by fresher more electronic tracks.

It's left to Fayne, drum machine master to put the album in context and it is such insights that are too rare in the film.

A good backing selection of clash and clash related backing tracks add to the film. Some of the live video footage is totally misplaced in terms of periods under discussion but splicing rare strummer interviews into the film adds to the focus.

Ultimately Garcia fails in his original vision to rewrite the closing days of the clash and falls back in some part to a damning critique, I am sure influenced by the reasonable but negative comments of Nick Shepperd and Pete Howard.

It has the feel of an anti Bernie film with Bernie and his allies, Paul and Joe absent making it a one sided story.

Finally Vince White. His contributions lead one to conclude two things. His behaviour then and now suggests someone with serious mental health problems and his raving drunken incoherent rants should never have been included in the film.

If you're not a Clash fan you may find this film so niche it is for anoraks.
Page 1 of 1