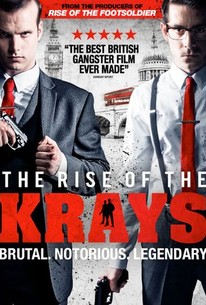 The Rise of the Krays Photos

The story of twin brothers Reggie and Ronnie Kray is told in this crime drama directed by Zackary Adler. Working from London throughout the early 1960's, Reggie (Kevin Leslie) and Ronnie (Simon Cotton) ran roughshod over their personal and professional counterparts while operating as members of the British Mob. Co-written by Ken Brown and Sebastian Brown, the film co-stars Matt Vael and Alexa Morden.

Mark Preston
as Gangster in Pub

Philip Howard
as Bob at the boozer

Joanne Manchester
as Lady at the casino
View All

Critic Reviews for The Rise of the Krays

A plodding, methodical thriller that generates little to no tension and is as anti-climactic as they come, it's ironic that this two-parter does not do justice to two of England's most infamous lawbreakers.

Audience Reviews for The Rise of the Krays

There are no featured audience reviews yet. Click the link below to see what others say about The Rise of the Krays!

The Rise of the Krays Quotes