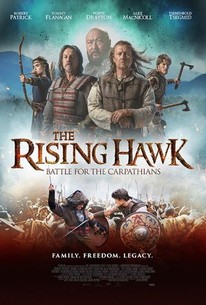 During the 13th Century, Zakhar Berkut (Robert Patrick) and his wife Rada (Alison Doody) lead a group of highlanders in the Carpathian Mountains. Unfortunately, their tranquil existence is soon threatened by Burunda Khan (Tsegmid Tserenbold), a powerful Mongolian general who leads his massive armies west in search of new lands to conquer. Forced to protect their village, Zakhar and Rada send their sons, Ivan (Rocky Myers) and Maksim (Alex MacNicoll), to ask for help from Tugar Volk (Tommy Flanagan), a wealthy boyar overseeing the land. After his strong-willed daughter Myroslava (Poppy Drayton) and Maksim survive a dangerous encounter together, Tugar Volk pledges to defend the villagers against the Mongols. But when a mutual attraction sparks between Myroslava and Maksim, Tugar Volk forbids them from continuing their relationship. Meanwhile, Burunda Khan faces questions from his warriors about his motivation and military strategy for the impending invasion. As war breaks out, both sides suffer devastating casualties. Redoubling his efforts, Burunda Khan unleashes the full fury of his forces. Faced with certain doom, Maksim and Myroslava must choose to flee or make the ultimate sacrifice to save their people.

Critic Reviews for The Rising Hawk

It's a dull historical action drama that is in desperate need of some gratuitous sex or violence to liven up its near two-hour running time.

Fall of a Kingdom looks like any other historical drama. But without the punch and dedication desperately needed to meet the filmmaker's admirable ambition, the action and drama fall flat before the plot can properly get underway.

You've seen many aspects of this Ukrainian battle epic handled better elsewhere, although like its characters, the film makes a valiant effort considering its limited resources.

Hardly of David Lean quality, but if you're willing to accept a hokey medieval adventure of the sort Hollywood used to turn out in the fifties, it might provide a fairly agreeable time.

An appealing handle on B-movie action and emotional content, while the performances find the vibe of the production with refreshing ease, supporting the effort with enjoyable thespian intensity.

There's a different energy amongst those cast members who have grown up with the story and, given the local prestige of the film, there's impressive talent among their ranks.

This would-be historical epic, inspired by a classic of Ukrainian literature, aims to be the country's version of Braveheart or 300, but ends up closer to a cheesy American B-movie.

There are no featured reviews for The Rising Hawk at this time.