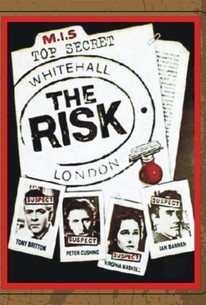 The Risk is a mild melodrama concerning the political aspects of germ warfare. A group of British scientists led by Peter Cushing develop a means of wiping out the bubonic plague and typhus. Unfortunately the method is variable enough to run the risk of spreading the very diseases it is designed to destroy. When the British government refuses to allow the results of the experiments to be published, the scientists seek out support from a big-time publisher (Raymond Huntley) who has his own diabolical agenda. The Risk has moments of genuine tension, though not enough to fully realize the storyline's potential. ~ Hal Erickson, Rovi

Critic Reviews for The Risk (Suspect)

There are no critic reviews yet for The Risk (Suspect). Keep checking Rotten Tomatoes for updates!

There are no featured reviews for The Risk (Suspect) at this time.