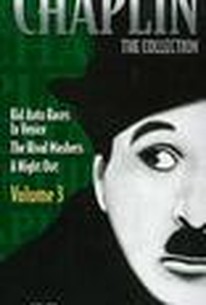 Charlie Chaplin's 28th Keystone comedy pits him against Chester Conklin as rival for the attentions of their landlady, Norma Nichols and for Chester's girlfriend, Cecile Arnold. After the midday meal, each of the rivals tries to chat up the landlady, only to be prevented by the other. They decide to go out together to prevent a fight, but they split up as Charlie stops in front of a bar while Chester proceeds to a park. Charlie is distracted, however, by a passing beauty who gives him the eye. He follows her a bit but is put off by the lady's large boyfriend. Going on to the park, Charlie has a confrontation with the large boyfriend and observes Chester's meeting with his girlfriend who is incredibly solicitous. She begs for affection and even gives Chester money, much to Charlie's amazement and envy. Charlie eventually dispatches both boyfriends and follows the girls to a movie theatre where, sitting between them, he charms the pair of beauties making some rather amusing gestures with his feet. The boyfriends show up and replace the girls in their seats while Charlie dozes. A fight ensues in which Charlie is thrown through the movie screen.

Critic Reviews for The Rival Mashers

There are no critic reviews yet for The Rival Mashers. Keep checking Rotten Tomatoes for updates!

There are no featured reviews for The Rival Mashers at this time.