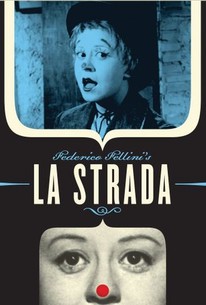 Acclaimed Italian filmmaker Federico Fellini drew on his own circus background for this classic film. Set in a seedy travelling carnival, this symbolism-laden drama revolves around brutish strongman Zampano, his simple and servile girlfriend Gelsomina, and clown/aerialist Matto.

Richard Basehart
as The Fool

Anna Primula
as (uncredited)
View All

Simple beauty is such a rare quality in films these days, when serious filmmakers everywhere seem to be turning to harshness and protest, that the tender humanity and compassion of this absorbing drama from Italy shine all the stronger.

It holds its own, more than six decades on. If Giulietta Masina and Anthony Quinn's tragic two-step doesn't break your heart, then Nino Rota's score will.

Fellini's fable about an innocent clown roaming postwar Italy with an abusive strongman has the romance of his later epics but a more potent sense of tragedy.

Its poignancy is accentuated by Masina's delicate performance and Nino Rota's exquisite score.

Art helps to magnify our emotions, to draw them out on a grand scale and craft a drama to fit the size they hold within us. And then, it becomes a little bit easier to identify with Zampanò, and to see the beauty of this film.

The great Giulietta Masina, who was Fellini's wife, is the heart and soul of La Strada.

A much-needed reminder of beauty and grace at a time characterized by anything but.

[It] should be seen as one of those movies that greatly expanded international audiences for foreign cinema.

Giulietta Masina lends a captivating innocence - almost impossible not to love - to a Chaplin-like waif while Fellini breaks away from neorealism with this magical and whimsical circus fable/road movie that has a beautiful score by Nino Rota and an unforgettable ending.

Fellini created a mélange of beauty with this mystical, fantastical story, that is more about the human condition, love, and suffering, than about entertainment, or more importantly, whimsy. It's really about a life wasted, and the extent of human suffering. What's worse is that the film continually shows uplifting, thoughtful scenes that you as the viewer believe will lead to a happy resolution for Gelsomina (Masina). It starts with her being sold to a strongman named Zampano (Quinn) (which of course bodes well for our heroine). She follows him around the country in a motorcycle traveling barrage, and works with him to be the comedic relief in his act. His solemn advances and possession over her amounts to Stockholm syndrome. She runs away and meets a clown (Basehart) who is poised to be the romantic lead. In reality he's only a red herring, and Gelsomina is stuck with Zampano as a companion, though neither likes nor tolerates the other. Gelsomina is also emotional, crying a lot of the time at her internment and the strongman's abuse. These two people should break apart, because neither is happy, and yet Zampano actually holds dominion over her, and won't let her go because he has monetary claim. It's a film of false starts and romantic tragedy, which makes it all the more horrific when the ending presents itself. Mythology and general lore definitely play a part in how the film is put together, and the whimsical tone and influences are obviously apparent in the tone and the way events are reflected in the narrative voice. The best thing about this film is that it looks and sounds like a quirky comedy about someone who deserves better, but really it's all about Zampano. He's the one who has command, he keeps Gelsomina hostage emotionally and physically, and he's the one we end on. It's his story to reflect on, and his to toil over in his mind. Though Gelsomina commands the screen most of the time, and is the person we feel for, it's not her end that we eventually see.

If you can ignore a few major plot-holes herein, I guess you'll enjoy the tragic journey (which hardly leads anywhere) of a girl in this classic movie.

My first Fellini movie, but definitely not my last. La Strada is an amazing film. At times it is very fun to watch and at others it is almost painful. It brings about an array of emotions that change throughout the entire movie.