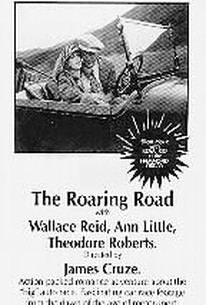 The silent Roaring Road delivered just what the fans of star Wallace Reid craved: youth, romance and speed. Reid plays an ambitious automobile salesman, in love with boss' daughter Ann Little. He also loves auto racing, and wants more than anything to enter an upcoming car-vs.-train race from San Francisco to Los Angeles. Reid talks his boss Theodore Roberts into allowing him to represent Roberts' company in the race. Does he win? Does he get the girl? Even 1919 audiences knew the outcome three reels before the fact, but Wallace Reid's popularity was such that he could have made a 6-reel version of the L.A. city directory and still packed the theatres.

Anna Little
as The Chub, His Sweetheart

Critic Reviews for The Roaring Road

Pioneer racing film has lively storytelling and fun view of technology from 100 years ago.

There are no featured reviews for The Roaring Road at this time.