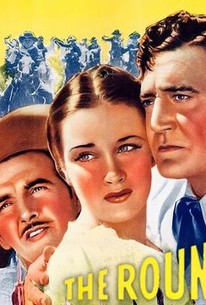 Originally written as a stage vehicle for corpulent character actor Macklyn Arbuckle, Ernest Day's The Roundup was first filmed in 1920 with Fatty Arbuckle (no relation) in the lead. By the time the film was remade in 1941, Arbuckle's character, a roly-poly frontier sheriff named Slim (!), was refashioned as a supporting role, with Jack Benny's radio announcer Don Wilson essaying the part. The plot, however, remained fairly intact: Upon hearing that her fiance Greg (Preston Foster) has been killed, Janet (Patricia Morison) agrees to marry rancher Steve (Richard Dix) on the rebound. On the day of the wedding, who should show up but Greg, determined to raise as much Hell as humanly possible. A rewritten finale permits the Steve-Janet-Greg triangle to resolve itself without offening the Hays Office. ~ Hal Erickson, Rovi

Critic Reviews for The Round Up

There are no critic reviews yet for The Round Up. Keep checking Rotten Tomatoes for updates!

There are no featured reviews for The Round Up at this time.

The Round Up Quotes