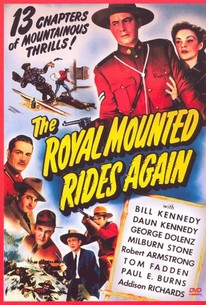 In time-honored fashion, a couple of supporting players -- George Dolenz and Bill Kennedy -- found themselves elevated to starring roles in this minor Universal serial. They played Royal Canadian Mounted Police officers investigating the murder of a miner. The story, of course, was less important than speed and action, which directors Ray Taylor and Lewis D. Collins delivered in typical slap-dash Universal style. Starlet Daun Kennedy did not make much of an impression as the imperiled leading lady, and former star Robert Armstrong (of King Kong fame) was wasted in a subordinate role. Rondo Hatton, a non-actor whose grotesque appearance (caused by acromegaly, the so-called "Elephant Man" disease) was tastelessly exploited by Universal in the '40s, appeared as one of the outlaws.

Helen Bennett
as Dillie Clark, aka Mme. Mysterioso
View All

There are no critic reviews yet for The Royal Mounted Rides Again. Keep checking Rotten Tomatoes for updates!

There are no featured reviews for The Royal Mounted Rides Again at this time.