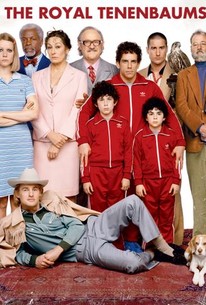 Critics Consensus: The Royal Tenenbaums is a delightful adult comedy with many quirks and a sense of poignancy. Many critics especially praised Hackman's performance.

Critics Consensus: The Royal Tenenbaums is a delightful adult comedy with many quirks and a sense of poignancy. Many critics especially praised Hackman's performance.

Critic Consensus: The Royal Tenenbaums is a delightful adult comedy with many quirks and a sense of poignancy. Many critics especially praised Hackman's performance.

Royal Tenenbaum and his wife Etheline had three children--Chas, Richie, and Margot--they were a family of geniuses and then they separated. Chas started buying real estate in his early teens and seemed to have had a preternatural understanding of international finance. Margot was a playwright and received a Braverman grant of fifty thousand dollars in the ninth grade. Richie was a junior champion tennis player and won the U.S. Nationals three years in a row. Virtually all memory of the brilliance of the young Tenenbaums was subsequently erased by two decades of betrayal, failure and disaster. Most of this was generally considered to be their father's fault. The tale follows the family's sudden and unexpected reunion one recent winter.

News & Interviews for The Royal Tenenbaums

View All The Royal Tenenbaums News

Critic Reviews for The Royal Tenenbaums

If it sounds bittersweet, it is, but like the best family albums, Tenenbaums is split wide with open-heartedness, and equally generous with its triumphs and failures.

This comedy-drama about a dysfunctional family of eccentric geniuses is exactly the kind of movie America could use. It's funny, poignant, laced with irresistibly flawed characters and focuses on the power of love in a family.

The film manages to be both sarcastic and sentimental. As odd as the Tenenbaums are, the family remains bound by love.

The Tenenbaums's self-referential outlook, wayward agendas, wanton destructiveness and wishful fantasy make for a highly entertaining spectacle, provided you acknowledge you're watching a churning status quo that will never alter in essentials.

With Anderson's images, seductive as they are, we can ultimately only guess -- what Margot's plays are about, or who Etheline's suitors are... And that makes Anderson's film an exhilarating experience, a real jungle gym for the imagination.

Each character, as ever, is tucked into a shell of his or her obsessions, and yet the filming itself -- the grace of Anderson's draftsmanship, as it were -- binds the figures together into a team.

Using a superb, dead-pan voiceover by Alec Baldwin, director Anderson invites the audience into the lives and secrets of each of the Tenenbaums.

Anderson's third film, and best overall, and one of my favorite movies of all time (20th anniversary)

Sure, it's endlessly quotable, both verbally and visually - have you seen that colour palette - but it's the pain and sweetness at the centre that will keep you revisiting this 21st century classic.

The fact that The Royal Tenenbaums is able to maintain a whimsical tone, coupled with profound moments of hurt and loss, and then still have the audacity to be an outright hilarious movie elevates it to something sensational.

The Royal Tenenbaums is silly but full of love. It shows that even at their worst, there is always some good in every family...

What really stands out is how rich the story's technical canvas and narrative textures actually are.

Audience Reviews for The Royal Tenenbaums

An appealing melancholy comedy with eccentric characters who are so very well developed, in a strange, unconventional narrative that invests in an offbeat atmosphere (as if out of a dreamlike version of New York) to tackle matters like loneliness and amends.

An interesting, offbeat film from Wes Anderson about a family of child prodigies (Ben Stiller, Gwyneth Paltrow, Luke Wilson) who grow up in a dysfunctional household, headed by their father Royal (Gene Hackman), and how the family comes back together under the same roof after many years after their father announces he has a terminal illness, after leaving the family a long time ago. Sometimes, Wes Anderson's style of film-making is infuriating. His characters can sometimes come across as robots spouting dialogue (like in "Moonrise Kingdom") or just flat out unbelievable and quirky for the sake of being quirky ("The Life Aquatic With Steve Zissou"). Here, he hits just the right balance of humor to offset the darker, sadder tones this story has. It is never laugh out loud hilarious, none of his movies are, but the sadness and heartbreak coursing through this family is definitely not expected, and in turn makes it quite touching. Hackman is phenomenal, as he always is, and the supporting cast is excellent as well. It almost veers off a cliff at its finale, but it still ends on a good note that ultimately makes it a worthwhile viewing.

Wes Anderson is an eccentric director who always manages to make in inventive, charming and memorable picture. With the Royal Tenenbaums, he crafts one of his finest films and he directs a great cast of talented actors who each bring something that make this such a memorable film. Wes Anderson has a distinctive directing style, one that is absolutely unique and engaging. I've seen quite a few of his films, and The Royal Tenenbaums is one of his best, and it boasts some great performances matched with an engaging storyline. Anderson fans will surely enjoy this, and like I've, it's one of his best movies and he displays his skills perfectly here. With this film, Wes Anderson seems to be even more confident behind the camera, and therefore he tells a more thought out and memorable storyline. Anderson is a great filmmaker, and he deserves more praise than what he gets, and film lovers should appreciate his work for what it is. What I mean by that is that many people won't even take a glance at his work, and easily dismiss it because of the somewhat eccentric way he makes his movies. I think it's a great shame because his films are very original, and each one becomes even more thought out than the previous one. The Royal Tenenbaums is a fine drama comedy that showcases the talents of a unique and original filmmaker perfectly. With Wes Anderson, you never know what type of film you'll get, but there will always be his signature style of having whimsical characters stuck in bizarre situations with each movie. That's what makes work worth seeing, and if you're not familiar with his work, this is a perfect place to start, along with Moonrise Kingdom. This is a stellar film, one that is well acted and directed and is highly engaging from start to finish.

There is some whiff of the golf club with Wes Anderson for me. He is sometimes funny, but what he perceives as humor leaves a lot to be desired. This movie has the makings of a good one, but never quite gets over the hedge. This is just an empty film.