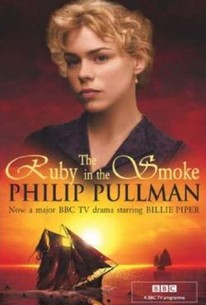 As directed by Brian Percival and adapted by scenarist Adrian Hodges from the bestselling period novel by Philip Pullman, the BBC production The Ruby in the Smoke recounts the 19th Century adventures of Sally Lockhart (Billie Piper), an aggressive and determined young Brit. Wielding a loaded pistol, fluency in Hindustani, and a fundamental knowledge of military maneuvers, Sally is anything but a typically submissive, Victorian Era girl. The tale finds her embarking on a quest to uncover the reasons for her father's premature death, and the reason why three seemingly harmless words from her mouth - "The Seven Blessings" - lead to the sudden demise of her father's associate. The film co-stars Robert Glenister, David Harewood and screen veteran Julie Walters as the vile Mrs. Holland. The film marks the first installment in a planned series of BBC productions based on Pullman's series of novels about Sally Lockhart. ~ Nathan Southern, Rovi

Critic Reviews for The Ruby in the Smoke

There are no critic reviews yet for The Ruby in the Smoke. Keep checking Rotten Tomatoes for updates!

Audience Reviews for The Ruby in the Smoke

After the death of her father at sea, Sally Lockhart(Billie Piper) is reminded constantly of her lack of prospects. To distract her from a fate worse than death, she receives a letter from Major Marchbanks(Miles Anderson) which she brings to Higgs(Trevor Cooper) after which he promptly drops dead of a massive heart attack, which is not connected to the awful spelling or grammar in the letter. It seems Marchbanks has a journal for Sally which he gives to her shortly before his premature demise at the hands of Mrs. Holland(Julie Walters) who now has her beady little eyes set on her. "The Ruby in the Smoke" is to be frank, a mess. This definitely feels like somebody tried to adapt a novel by trying to squeeze everything in without sacrificing anything in the bargain. Thus, at first, it is hard to tell what is going on, followed by major characters and storylines coming and going at will while a clear plot eventually materializes. And even in its criticisms of the British Empire and Victorian England, the movie takes a heavy handed route, even sounding like just another anti-drug screed at one point.

I guess it would've made a lot more sense had I read the book first. Now I had a feeling that there was too much going on. You know, things seemed to move too fast.

The Ruby in the Smoke Quotes