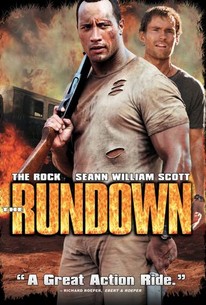 Critics Consensus: The Rundown doesn't break any new ground, but it's a smart, funny buddy action picture with terrific comic chemistry between Dwayne "The Rock" Johnson and Seann William Scott.

Critics Consensus: The Rundown doesn't break any new ground, but it's a smart, funny buddy action picture with terrific comic chemistry between Dwayne "The Rock" Johnson and Seann William Scott.

Critic Consensus: The Rundown doesn't break any new ground, but it's a smart, funny buddy action picture with terrific comic chemistry between Dwayne "The Rock" Johnson and Seann William Scott.

Beck (The Rock) is a "retrieval specialist" in hock to a powerful and not particularly nice gentleman named Walker (William Lucking). Beck is anxious to retire from his dangerous work and open a small restaurant. Walker tells Beck he'll be free and clear with enough cash to fulfill his dream if he does one more job. He sends Beck into the Brazilian rainforest to bring back his wayward son, Travis (Seann William Scott). Travis is down there looking for a legendary idol, El Gato Diablo, which he could sell for millions if he found it. A pretty local, Mariana (Rosario Dawson), offers Travis the use of her boat in exchange for a cut of the take on the statue. But the powerful Hatcher (Christopher Walken) owns the area's huge mine, where locals work for slave wages, and feels that anything found in the area is his property. He refuses to let Beck take Travis back to the U.S. until the statue is in his hands. Using his estimable fighting prowess (he doesn't like guns), Beck manages to get Travis out of town, but Travis doesn't want to go home, and he ends up getting them stranded in the jungle, where they're confronted with horny monkeys and angry guerrillas. To make matters worse, Hatcher and his thugs are hot on their trail, and Mariana turns out to have her own motives for getting involved. The Rundown, the second film directed by actor Peter Berg (Very Bad Things), features a brief, uncredited cameo by Arnold Schwarzenegger. ~ Josh Ralske, Rovi

Patrick A. Jankiewicz
as Goon

News & Interviews for The Rundown

View All The Rundown News

Critic Reviews for The Rundown

The Rock and Seann William Scott work up some nice comic chemistry, but it's the dependably warped Walken who steals the most scenes. The frenetically edited fight sequences will satisfy the blood lust of the target audience.

With charm, style and just a bit of winking intelligence, Johnson shows a magical ability to carry a picture from start to finish. If only the movie was worth the star's winning efforts.

Sounds worse the more you talk about it.

The screenplay ... is the sort of mishmash of action-hero and mismatched buddy-movie clichés that makes obsessive action-film geeks, such as myself and the friend I attended the screening with, gnaw our lips off in sheer desperation.

A tolerable alternative when everything else playing at the mall is sold out on Saturday night.

The Rock and Scott play an unconventional buddy team that has a similar dynamic to Robert De Niro and Charles Grodin in Midnight Run, but without the acting ability or comic touch.

...with The Rundown, presumably hampered by a PG-13 rating, Berg unleashes the Michael Bay within and turns each action sequence into an over-the-top spectacle.

A lot of fun and just a balls to the wall guy action flick...

I think you can smell what the Rock is cooking: a dish that'll fatten your head but pleasantly plump your gut. [Blu-ray]

If, like me, you dismissed The Rundown as just another stupid action vehicle for Dwayne "The Rock" Johnson - get in the apology line behind me

It's Midnight Run with added insects but with only a twentieth of the humour and a hundredth of the charm.

Audience Reviews for The Rundown

I only liked the action scenes.

By the numbers jungle actioner with some cool stunt sequences - and Christopher Walken oppressing the natives! - but missing the essential wet tee shirt teaser that is one of the hallmarks of this genre.

It's so nice when you can still have movies like this come out. This is such a well rounded story with great characters, beautiful cinematography and a little bit of comedy thrown in. The Rock shows again how awesome a human being he is with his physical force and cooking skills, not to mention a great sense of humor. Seann William Scott plays really well off of him and they make for such a great team. This also manages to be a great action/adventure movie without being over the top or too crude for some people, it's truly one of the most accessible movies of its kind.

The Rundown is a good little action comedy film. Though flawed at times, and somewhat confusing in it's action sequences, this film is quite enjoyable, and a lot of fun. Christopher Walken delivers yet a great performance. The Rundown is a good mix of action and comedy, and The Rock and Sean William Scott deliver good comedic performances. The film has well thought out action sequences, and Walken is delightfully evil. This film though good, is slightly overrated. I felt that the film was missing something to make this film really special. But for what it is, The Rundown is a pleasant time waster. This one film that you can watch and have a good time. There's plenty of laughs and action here to please anyone who's looking for a good action comedy film. However, for me this is a film that requires repeat viewings to really enjoy it. No matter what your stance is on the film afterwards, you will be entertained nonetheless.