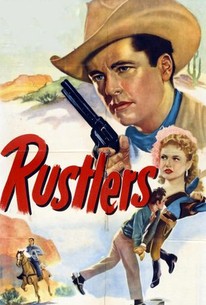 Another of RKO's profitable Tim Holt western series, Rustlers costars Holt with his popular sidekick Richard Martin (as Chico Rafferty). Holt and Martin are arrested by sheriff Harry Shannon, who accuses them of being members of a vicious rustling gang. Actually Shannon is the head of the operation; he hopes to throw suspicion off himself by framing Our Heroes for the crime. Holt and Martin bust out of jail, prove their innocence, and fix Shannon's wagon. Rustlers was one of a handful of Holt westerns directed by Lesley Selander, later a minor favorite of auteur critics. ~ Hal Erickson, Rovi

Critic Reviews for The Rustlers

There are no critic reviews yet for The Rustlers. Keep checking Rotten Tomatoes for updates!

There are no featured reviews for The Rustlers at this time.