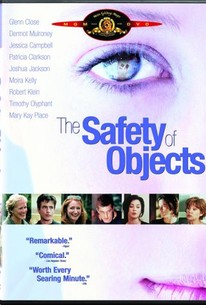 Critics Consensus: The large cast of characters and scripting are too unwieldy, and the suburban angst theme feels tired.

Critics Consensus: The large cast of characters and scripting are too unwieldy, and the suburban angst theme feels tired.

Critic Consensus: The large cast of characters and scripting are too unwieldy, and the suburban angst theme feels tired.

The Safety of Objects Photos

Following up on her 1998 opus Bedrooms and Hallways, Rose Troche directs this ensemble film about suburbia and its discontents. Once an up-and-coming singer/songwriter, Paul Gold (Joshua Jackson) now lies in a coma, attentively nursed by his mother Esther (Glenn Close), who dotes on her son to the exclusion of her husband and her daughter Julie (Jessica Campbell). Meanwhile, Jim Train (Dermot Mulroney) is a workaholic lawyer who is closer to his tortes than to his spouse Susan (Moira Kelly). Their son Jake has taken a morbid fascination with his sister's foot-high girl doll. At the same time, Paul's former lover Annette Jennings (Patricia Clarkson) is trying to pull her life and her family back together after a particularly brutal divorce. This film was screened at the 2001 Toronto Film Festival.

Elisa Moolecherry
as Female Contestant No. 2

Hunter Shannon
as Audrey
View All

Critic Reviews for The Safety of Objects

Troche has created a truly moving film, upsetting and uplifting in equal measure.

Simply put, there's too much going on, and too many fragile, damaged characters to fret appropriately over.

A richly compelling movie that is as hard to forget as it is difficult to warm up to.

It's a movie located in an interesting place, but without quite enough self-confidence really to inhabit it.

The sheer number and variety of miseries on view suggest a kind of wallowing.

In boldly departing from the safety of a strong, unifying plot, Troche makes virtual objects of her characters by showing us plenty that intrigues and not enough that enlightens.

Though well-acted, Troche's third film, an adaptation of short stories, is a minor addition of a fractured, ensemble narrative to the overly populated genre of suburban malaise and anomie in the wake of the success of Mendes' Oscar-winner American Beauty

...there's a lot worth recommending about the film.

The time required to introduce more than a dozen major characters eats into the two-hour film, leaving precious few minutes for development.

Audience Reviews for The Safety of Objects

Saw this sometime ago and really enjoyed it, so was glad to see it going really cheap on Amazon. The rewatch was just as good. Great cast including a very young Kristen Stewart. I liked how the stories about the three sets of neighbours all wound together. Though it is a drama, there is some black humor there as well. The Barbie doll in particular made me laugh. Very realistic with that hair - kind of creepy actually!

What an odd movie.. I liked it and I really don't know why.. these neighbors are as screwed up as the next.. they are like one big disfunctioal family living in different house's on one street.. but yet this film is very sad too.. theres just so much going on.. its just something you need to watch for yourself to understand.. I loved it.

So I bought this movie as an impulse buy at hollywood video for $5. it was actually really good. and the way that they did the opening credits was really creative and wonderful. they had four different houses and little people on tracks came out of each house to represent the different members of each of the four families. plus the symbolism about the stoicness of the little plastic people on the repetitive tracks in and out of the houses was good. even though the summary says that they are all having different problems they all stem from one car accident that connects them all together. and each main character is obsessed with an "object," whether it be a car, a job, a doll, or unfortunately, a comatose son. so it was about people finding solace in these objects and then realizing that they have to come to terms with reality and let things go. and there are a lot of other things going on as well.

The Safety of Objects Quotes