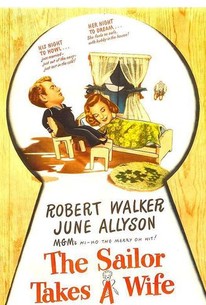 The Sailor Takes a Wife Photos

A quickie post-WWII marriage becomes complicated in this romantic comedy, the second film pairing of Robert Walker and June Allyson. Swept off her feet in one whirlwind night by dashing U.S. Navy man John (Walker), the young, attractive Mary (Allyson) agrees to a fast, ill-considered wedding. John ships out immediately afterward, with no time for a honeymoon or even a consummation of the marriage. Much to Mary's chagrin, John is quickly discharged from the service for medical reasons and returns home. The transition to domestic bliss is an uneasy one for Mary and John, who are essentially strangers. Each becomes the object of affection for others. Mary fends off the unwelcome advances of her boss Freddie (Hume Cronyn), who wants to break up her fragile relationship so he can ask for her hand. At the same time, the innocent John is slow to realize that a war refugee neighbor who lives in their apartment building is interested in more than a platonic friendship. The Sailor Takes a Wife (1945) costarred popular comic actors Eddie "Rochester" Anderson and Joe De Rita, better known as "Curly Joe" of The Three Stooges. ~ Karl Williams, Rovi

Critic Reviews for The Sailor Takes a Wife

There are no critic reviews yet for The Sailor Takes a Wife. Keep checking Rotten Tomatoes for updates!

There are no featured reviews for The Sailor Takes a Wife at this time.

The Sailor Takes a Wife Quotes