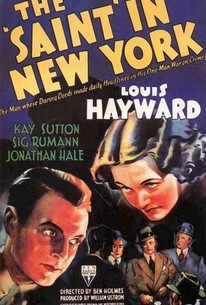 The Saint in New York Photos

The Saint, Leslie Charteris' charming but deadly criminal-turned-sleuth, made his first film appearance in RKO Radio's The Saint of New York. Faithful to Charteris' original concept, this first movie Saint is a cold-blooded murderer, redeemed by the fact that all of his victims are notorious gangsters who'd otherwise elude the clutches of the law. Hired by a coterie of businessmen, Simon Templar (Louis Hayward), aka the Saint, methodically rids New York of its worst criminals, though "The Big Fellow", aka Hutch Rellin (Sig Rumann), continues to elude him. He is aided by Rellin's enigmatic mistress Fay Edwards (Kay Sutton), who pays for her actions with her life. The film's most memorable moment finds Templar disguising himself as a nun to dispose of a particularly nasty villain. The success of The Saint of New York prompted RKO to negotiate with Charteris for a series of "Saint" films, with George Sanders and Hugh Sinclair taking over from Louis Hayward as the title character.

Critic Reviews for The Saint in New York

There are no critic reviews yet for The Saint in New York. Keep checking Rotten Tomatoes for updates!

Audience Reviews for The Saint in New York

There are no featured audience reviews yet. Click the link below to see what others say about The Saint in New York!

The Saint in New York Quotes