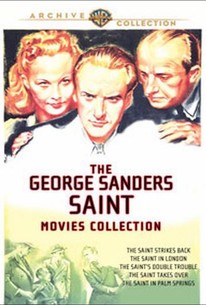 In this fourth film in RKO's series based on Leslie Charteris' modern Robin Hood "The Saint", George Sanders plays Simon Templar, alias the title character. The Saint's quarry is a ring of gamblers who have been fixing horse races. Inspector Fernack (Jonathan Hale), the Saint's friendly adversary, has been accused of accepting bribes to cover up the crooks' activities, prompting our hero to try to clear Fernack's reputation. Aided by his girlfriend (Wendy Barrie) and petty criminal Pearly Gates (Paul Guilfoyle), the Saint routs the gamblers, but not before nearly losing his own life. George Sanders would play the Saint twice more before leaving the series to become The Falcon, a Saint-like sleuth in another of RKO's B-picture series.

Critic Reviews for The Saint Takes Over

Fair programmer in the Saint series.

There are no featured reviews for The Saint Takes Over at this time.

The Saint Takes Over Quotes