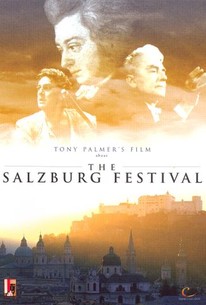 Tony Palmer, music aficionado, occasional rock performer (the albums See You at the Knee, Long Time Comin' Home), and director of classic performance films from multiple musical genres such as Frank Zappa's 200 Motels (1971), the massive Wagner (1983), and Maria Callas: La Divina (1987), helms the 3 hour documentary Tony Palmer's Film About the Salzburg Festival (aka The Salzburg Festival). The Austrian Film Commission granted Palmer nearly limitless access to their archives, from which he collected and assembled over 85 years' worth of footage of the world's foremost opera venue, studded with oratorios from the most accomplished practitioners of the craft - everyone from Toscanini to Callas to Anne-Sophie Mutter to Mitsuko Uchida. Some of the dozens of highlights include: Brandauer and Schell's distinct interpretations of +Federmann; Furtwanger's 1954 performance in +Don Giovanni; Nazi footage at Salzburg, shot during the Hitler regime; and interviews with everyone from Domingo to Levine to Rattle.

Critic Reviews for The Salzburg Festival

There are no critic reviews yet for The Salzburg Festival. Keep checking Rotten Tomatoes for updates!

There are no featured reviews for The Salzburg Festival at this time.