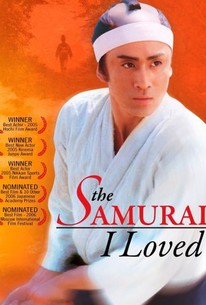 The Samurai I Loved Photos

A young samurai stuck at the bottom of the hierarchical order attempts to rescue his childhood sweetheart from an evil clan lord after learning of a plot to kill her and her infant child. Bunshiro Maki is a skilled swordfighter who's lethal with a blade, yet still can't rise through the ranks of the system. After his father is accused of plotting against his clan and forced to commit ritual suicide, his longtime love Fuku is sent to Edo to become the clan lord's concubine. A few years later, Fuku has bore the clan lord a son. When Maki learns that the clan has hatched a plan to kill Fuku and her son to secure succession to the throne, he recruits two childhood friends to help thwart the diabolical plot. ~ Jason Buchanan, Rovi

Critic Reviews for The Samurai I Loved

There are no critic reviews yet for The Samurai I Loved. Keep checking Rotten Tomatoes for updates!

Audience Reviews for The Samurai I Loved

although this film played well at the festivals that it played at, i struggled the whole way through with how much i actually liked the film. at parts it felt like a strong 3 1/2 star film, but in the end it turned out to be rather average when compared with other samurai films over the past decade. the acting and cinematography were superb and i really enjoyed the art direction in the film, but the dialogue was sub par, the story was scattered at times and in some moments almost incoherent, and the ending added an element of pretentious manipulation to a story that didnt build well at all to the climax the director was looking for. some good elements, some not so good, average film.

The Samurai I Loved Quotes