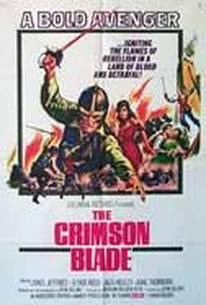 Its the Cavaliers vs. the Copperheads in this costume drama set during the 17th-century British Civil War. Our sympathies are supposed to be with Oliver Cromwell's underground troops--and they are, since the arrogant Cromwell isn't around to comprise his followers' heroism. Lionel Jeffries, loyal to Cromwell, is confounded by his daughter June Thorburn's fidelity to the Throne. Oliver Reed co-stars as Jeffries' right-hand man and June's boyfriend. Crimson Blade does little to clarify the complex issues attending the war, but it delivers the goods in the action department. ~ Hal Erickson, Rovi

Robert Rietty
as Charles I

John Stuart
as Beverley
View All

Critic Reviews for The Scarlet Blade (The Crimson Blade)

A well-crafted but routine historical swashbuckler.

There are no featured reviews for The Scarlet Blade (The Crimson Blade) at this time.