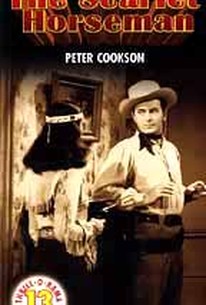 In this below-average western serial, a Texas ranger goes undercover as "The Scarlet Horseman," a legendary figure for the Commanche tribe whose leadership they respect. The reason for the ranger's sudden interest in Commanche affairs stems from a series of kidnappings of wives and daughters of senators in an attempt to force a partition of Texas. Behind the scheme is Matosca, a mysterious woman who turns out to be the daughter of a discredited senator. The cast of this serial is more interesting than the overly complicated plot or the rather pedestrian action sequences. Peter Cookson, a typically bland 4F leading man of the early '40s, earned star billing, although the title role is played by Paul Guilfoyle, a sneaky-looking character actor who usually played hoodlums. Even more surprising than Guilfoyle's sudden heroics is the presence of Virginia Christine ("Mrs. Olsson" of coffee commercial fame), a blond dialectician rarely found in such slam-bang surroundings. Victoria Horne, the wife of comedian Jack Oakie, played a treacherous Indian squaw and Janet Shaw, an all-purpose Universal starlet, was the little seen heroine.

Harold Goodman
as Idaho
View All

Critic Reviews for The Scarlet Horseman

There are no critic reviews yet for The Scarlet Horseman. Keep checking Rotten Tomatoes for updates!

There are no featured reviews for The Scarlet Horseman at this time.