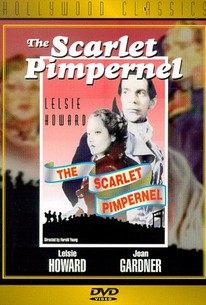 This film from director Harold Young is the second big-screen adaptation of Baroness Emmuska Orczy's 1905 novel The Scarlet Pimpernel. Leslie Howard stars as Sir Percy Blakeney, a British aristocrat who rescues innocent victims of the French Revolution under the guise of The Scarlet Pimpernel while maintaining the identity of a foppish dandy by day. Even his wife, Lady Marguerite Blakeney (Merle Oberon), is unaware of Percy's heroic alter-ego as he and his band of likeminded masked men save countless people from the guillotine. Perhaps the most famous adaptation of the classic book, The Scarlet Pimpernel would later be lampooned in 1966's Don't Lose Your Head.

Nigel Bruce
as Prince of Wales

Gibb McLaughlin
as The Barber

A. Bromley Davenport
as French Innkeeper

Derrick De Marney
as Members of the Pimpernel League

Bill Shine
as An Aristocrat

Arthur Hambling
as Captain of the Guard

News & Interviews for The Scarlet Pimpernel

View All The Scarlet Pimpernel News

Critic Reviews for The Scarlet Pimpernel

Were it not for the polished acting, particularly of Leslie Howard, fallow patches, occasionally apparent, would be more plainly revealed; but Howard is studied, resourceful and charming, his timing perfect as always.

British-made, with Leslie Howard in one of his very best performances as the nobleman who risks his neck...

The acting, too, is an effective blend of easy polish and truculent vigour; and Leslie Howard gives a quite excellent rendering of the Pimpernel, particularly in his scenes with Lady Blakeney.

Those who want a story of romance and adventure will not be disappointed. The Scarlet Pimpernel lives, the life in England and France are convincingly represented, and the suspense is maintained through-out.

Robust as an action packed hero tale and love story.

Audience Reviews for The Scarlet Pimpernel

An Englishman, some lord or something, shoots over to France in secret and frees French nobility on their way to Madame Guillotine. I was confused as to the politics (weren't these the "let them eat cake" crowd, the ones who dressed and ate good while the common populace starved? Why are we saving them? Off with their heads! ... but I digress) but it's an adventure tale so history's not too important compared with thrills. The thrill here is not in any swashbuckling derring-do, though that might've been nice, but rather watching the Pimpernel's Clark Kent persona infuriate the elitist yokels with wit and subterfuge. To that cause Leslie Howard ("Ashley" of GWTW fame) is well suited, and it becomes the reason for the whole movie.

There were no actions scenes, and I was confused as to how Chauvelin found out that Percy was the Scarlet Pimpernel. It's boring and not really worth a watch.

Well made and acted but the Anthony Andrews/Jane Seymour version is better.

The Scarlet Pimpernel was the first Batman! Leslie Howard gives a great performance as the Scarlet Pimpernel. He journeys into Revolutionary torn France to help Aristocrats escape the Guillotine and bring them to England. Like Batman he wears disguises, fights against great odds, fearless, and when in England he acts like a dandy.Like Bruce Wayne he plays the rich playboy to the tee. He walks around gossiping, talking about nothing but clothes, and acts the coward. He is so convincing that nobody suspects him, not even his own wife. It looks great and has a great villain in Raymond Massey.