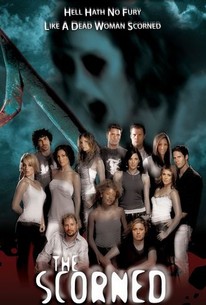 A sunny summer beach house serves as the unlikely stage for a series of brutal murders in director Robert Kubilos' blood-soaked tale of betrayal and revenge. Their marriage rapidly approaching and their relationship quickly crumbling, engaged couple Matt (Bob Guiney) and Raina (Trish Schneider) have a knock down, blow out confrontation in their remote Malibu beach house that drives Matt into the open arms of Raina's maid of honor Nicole (Trishelle Cannatella). When Raina discovers the spiteful duo in a compromising position, the violent struggle that ensues finds Raina meeting a grim fate at the bad end of a particularly sharp knife. In the following months, the darkened beach house sits perched silent and lifeless on the shore as pleasure-seeking vacationers go out of their way to procure less tragic accommodations. When 17 months have passed and unassuming vacationers Oliver (Steven Hill), Kirsten (Jenna Lewis), Seth (Reichen Lehmkuhl), and DQ (Johnny Fairplay) rent the beach house unaware of its bloody history, a demonic lust washes over the foursome forcing them to betray their romantic relationships. As the flesh-lust quickly turns to blood-lust and a local spiritualist (Ethan Zohn) warns the remaining trio that Raina's vengeful ghost holds malevolent power over the home, Kirsten, Murray, and Oliver are forced to struggle for survival against an unseen entity of murderous persuasion.

Erika Landin
as Sandra
View All

Critic Reviews for The Scorned

The Scorned is precisely what a movie that was slapped together by a bunch of Reality Show Stars should be: laughable.

Audience Reviews for The Scorned

There are no featured audience reviews yet. Click the link below to see what others say about The Scorned!