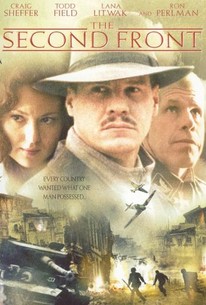 A brilliant German Jewish scientist developing a weapon of incalculable power is courted by intelligence services from England, Germany, and Russia in this World War II-era thriller starring Craig Sheffer, Todd Field, and Ron Perlman. Nicky Raus is a scientist who may hold the key to winning a world war, and when German agents attempt to abduct Raus, American agent Frank Hossom is assigned the task of bringing the scientist back dead or alive. Hossom forges an unexpected romantic bond with Raus' lover, Olga Ryabina -- an actress forced to assume the role of secret operative for the KGB -- and the dangerous love triangle that forms sparks international intrigue while simultaneously threatening to consume all involved.

Aleksandr Dyachenko
as Lubenets
View All

Critic Reviews for The Second Front

There are no critic reviews yet for The Second Front. Keep checking Rotten Tomatoes for updates!

Audience Reviews for The Second Front

There are no featured audience reviews yet. Click the link below to see what others say about The Second Front!