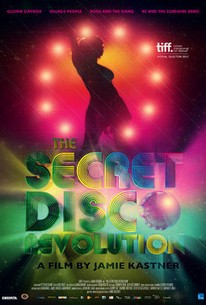 The disco era, long dismissed as a time of hedonistic excess, has been gravely misunderstood. Revisionist historians now argue the era was in fact an important time of protest: liberating gays, blacks and women. THE SECRET DISCO REVOLUTION juxtaposes disco revisionists against revealing new interviews with the era's biggest stars: Gloria Gaynor (I Will Survive), Village People (YMCA, In The Navy), Robert "Kool" Bell from Kool and the Gang, and Harry Wayne "K.C." Casey - KC and the Sunshine Band. ... A goldmine of rarely seen stock footage, and enough disco hits to shake your booty straight back to 1978. But the film's form is as revolutionary as its content: This quietly hilarious doc-satire also features an unreliable Nabokovian narrator; "reenactments" that are speculative to the point of complete fantasy; and a unique tone of sustained irony that both presents a fresh look at a well-known era, and compels audiences to question it, without ever allowing them off the dancefloor Written, produced, and directed by Jamie Kastner,a Toronto-based filmmaker and writer whose work has received international acclaim (Kike Like Me, Recessionize! For Fun And Profit! , Free Trade is Killing My Mother, Djangomania!) (c) E One

"The Secret Disco Revolution" laughably fails to turn Barry White and Donna Summer into the Che Guevara and Emma Goldman of the dance floor.

Faddish taste may be interesting for some, but for others it will devolve into the banal, as cultural history as well as entertainment.

The veil is lifted on this secret movement, one that everyone else thought was just about dancing and doing coke.

The movie feels like a flakey, off-the-cuff blog post that somehow transmogrified itself into a feature-length documentary.

"The Secret Disco Revolution," claims that the steady "four on the floor" beat was the reason for the liberation of gays, African Americans and women. And oddly, in a blend of humorous and dead serious storytelling, director James Kastner makes his case.

There's silliness, too, but the facts turn the beat around.

The film's strongest moments are in its case for what brought down disco including its broad expansion via radio.

While there is plenty of interest in Kastner's documentary, anybody with more than a passing knowledge of the disco era will know most of it already.

It's a thorough but strained attempt to be provocative.

Much will be familiar, though this is the first time I've heard that the original discotheques came about in France under the Nazi Occupation.

There are no featured audience reviews yet. Click the link below to see what others say about The Secret Disco Revolution!