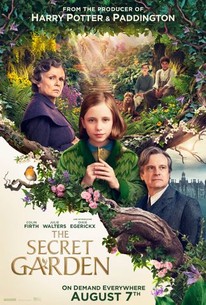 Critics Consensus: Faithful in spirit while putting its own spin on the source material, The Secret Garden adds a charming entry to the long list of this beloved book's adaptations.

Critics Consensus: Faithful in spirit while putting its own spin on the source material, The Secret Garden adds a charming entry to the long list of this beloved book's adaptations.

Critic Consensus: Faithful in spirit while putting its own spin on the source material, The Secret Garden adds a charming entry to the long list of this beloved book's adaptations.

THE SECRET GARDEN starring Colin Firth, Julie Walters and Dixie Egerickx is a new take on the beloved classic novel of the same name written by Frances Hodgson Burnett. Set in England during a new time period in 1947, the film follows a young orphan girl who, after being sent to live with her uncle, discovers a magical garden on the grounds of his estate.

News & Interviews for The Secret Garden

Breakdown of 2020 Movie Delays, and When They Will Hit Theaters

View All The Secret Garden News

Critic Reviews for The Secret Garden

The latest adaptation of Frances Hodgson Burnett's 1911 novel is not necessarily a bad film, just an unnecessary one.

Makes puzzling choices in harvesting the material, mostly providing an incentive to go back and watch the last one again.

A slightly monotonous, but still wondrous reading of the source.

I have never watched an adaptation of Frances Hodgson Burnett's novel and repeatedly thought, "Is someone going to get murdered?!" Until now.

In a year defined by surprise, the predictability of "The Secret Garden" - a new film adaptation of Frances Hodgson Burnett's beloved 1911 novel - proves more charming than tedious.

This adaptation leans heavily on clichés the story doesn't need.

Without conveying the component of serene nobility that bitterness can have, and that sadness never possesses, the film doesn't quite reach the heights that it should. [Full Review in Spanish]

It's hard to make a bad film out of such rich material, and even though it is not as strong as Agnieszka Holland's 1993 adaptation, this version offers... a sufficiently sinister air. [Full Review in Spanish]

Just by using the basic story this movie should have been something special. It isn't.

This new version changes a few of the details but maintains a certain sense of wonder and period imagination.

While this version looks lovely, it's a disappointing, inert telling.

The Secret Garden guides us through tragedy and grief with a level of maturity that ultimately shows us hope, magic and the ability to find our way again.

There are no featured reviews for The Secret Garden at this time.