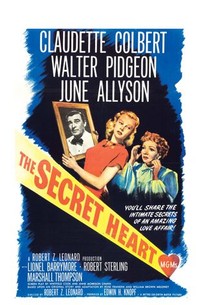 The Secret Heart is a psychological drama starring June Allyson as a disturbed teenager obsessed with the memory of her dead father and unable to embrace her stepmother. Following the suicide of her father, Penny Addams (Allyson) begins to behave strangely, even locking herself in her room and playing the piano in his memory. Greatly worried, Penny's brother, Chase (Robert Sterling), and stepmother, Lee (Claudette Colbert), consult a psychiatrist, Dr. Rossiger (Lionel Barrymore), who suggests that Penny be returned to the family's country home. Since the site is where the suicide took place, Rossiger believes that confronting the scene will force the young woman to mentally face the reality of her father's death. Once there, however, Penny becomes disenchanted with her father's memory -- which causes her to become even more despondent than ever. Eventually, Penny tries to kill herself in the same manner of her father, but she fails, and the healing process proceeds for all concerned. This dark tale, offbeat for its time, was narrated by Hume Cronyn.

Ann Lace
as Penny as a Child

Dwayne Hickman
as Chase as a Child

Hume Cronyn
as Man
View All

Critic Reviews for The Secret Heart

There are no critic reviews yet for The Secret Heart. Keep checking Rotten Tomatoes for updates!

There are no featured reviews for The Secret Heart at this time.