The Secret Life of Pets2016 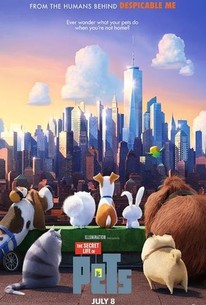 The Secret Life of Pets Videos

The Secret Life of Pets Photos

For their fifth fully-animated feature-film collaboration, Illumination Entertainment and Universal Pictures present The Secret Life of Pets, a comedy about the lives our pets lead after we leave for work or school each day. Comedy superstars Louis C.K., Eric Stonestreet and Kevin Hart make their animated feature-film debuts in The Secret Life of Pets, which co-stars Ellie Kemper, Lake Bell, Jenny Slate, Bobby Moynihan, Hannibal Buress and Albert Brooks. Illumination founder and CEO Chris Meledandri and his longtime collaborator Janet Healy produce the film directed by Chris Renaud (Despicable Me, Despicable Me 2), co-directed by Yarrow Cheney and written by Brian Lynch and Cinco Paul & Ken Daurio.

Critic Reviews for The Secret Life of Pets

Maybe Illumination and Universal should look at why Pixar succeeds instead of just ripping them off and regurgitating the leftovers.

The film [is] loud, colourful, frantic in pace, but less than the sum of its parts.

It's co-directed by Chris Renaud, who co-directed the Despicable Me movies. It doesn't rise to that level, but it's still full of fun for young children.

After the first ten minutes I was incredibly excited to discover where the lot of them were going to take things next. I shouldn't have gotten my hopes up.

The Secret Life of Pets plays to animal lovers in the audience without offering up much original story.

It is an incredibly simple yet irresistible idea for a movie. It's also exactly what you think it's going to be - no more, no less.

There are some heartfelt moments, but they are drowned out by the obnoxious nonsense that surrounds them.

It's as deep as a dog's dish, but it is, one might say, doggone funny.

Cheney and Renaud traded verve for cacophony as well as the unforgivable use of "Welcome to New York," perhaps the most garish song of Taylor Swift's career...

Though it ought to be primarily a comedy, it's certainly more thrillingly adventurous than laugh-out-loud funny.

A celebration of the relationship between pets and their pet owners.

The Secret Life of Pets isn't going to end up anywhere near the best animated film of the year, but it's entertaining enough that if you need to get the family out of the house on a scorching afternoon, this will be a fine choice for you.

Audience Reviews for The Secret Life of Pets

Disappointing animated movie that is more or less remaking Toy Story 1 just with Pets. And while the title promises lots of pets, it's mostly dogs that are running the show. Cats are just fat, bitchy or antagonizing, while dogs show all kinds of characteristics. That's frustratingly narrow minded and not particularly original. The animation is flawless and a few jokes work, but overall you can't shake off the feeling that you've seen it all before, and better.

Pretty cute, but escalates really quickly and almost too fantastically. And was Snowball's psycho-dream murmuring, "That raccoon is lying! He's not the president!" an implicit jab at President Obama using an antebellum epithet for African-Americans? How did that get past the censors?

It always amazes me how Universal never cares to create anything remotely clever when it comes to their animations, and so once again they come up with a harmless little story that wants to be cute and funny (which it is sometimes) but is only bound to be quickly forgotten.

The Secret Life of Pets Quotes