The Secret of Convict Lake1951 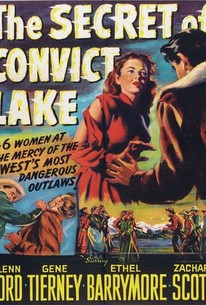 The Secret of Convict Lake Photos

Glenn Ford plays a convict who breaks out of a 19th century Nevada prison in the company of several less handsome inmates. When they enter a snowbound California village, they find that all the men have left to prospect for silver; only the women remain. The village is known as Convict Lake because, years earlier, $40,000 of stolen money was hidden somewhere in the area. Town matriarch Ethel Barrymore seems to know where it is, but she ain't talkin'. After recovering the money, the convicts are forced to shoot it out with the returning menfolk. All prisoners are rounded up by the law except for Glenn Ford, who has fortuitously been cleared of false charges, allowing him a fadeout embrace with costar Gene Tierney. ~ Hal Erickson, Rovi

Tom London
as Jerry
View All

Critic Reviews for The Secret of Convict Lake

None of the characters is entirely likable, but the cast, headed by Gene Tierney, Glenn Ford and Ethel Barrymore, makes the tale believable.

A grotesquely overcivilized Western larded with small talk about decency and indecency, peace of mind, kindness.

The predictable feel-good melodrama is watchable because of Ford and Tierney.

Audience Reviews for The Secret of Convict Lake

Decent drama with a western setting. What distinguishes this from the many like it is the cast. Only in studio era Hollywood would a routine western have a cast roll that consisted of Glenn Ford, Gene Tierney, Ethel Barrymore, Zachary Scott, Jeanette Nolan and the great Ann Dvorak, whose final theatrical feature this was. At a brisk 80 minutes this keeps the tension taut throughout.

The Secret of Convict Lake Quotes