The Secret of My Success1965 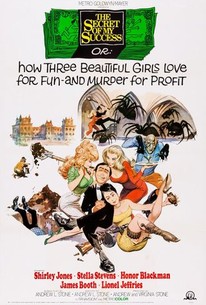 The Secret of My Success Photos

At the beginning of The Secret of My Success, dimwitted Arthur Tate (James Booth) is a local village bobby who always follows his mother's advice to "help other people, and never look for the evil in them" -- perhaps not the best advice for an officer of the law. Tate soon finds himself investigating a murder case involving the husband of a local dressmaker Stella Stevens. She uses her wiles to trick Tate into unwittingly disposing of the body -- but Tate's mother uses her own wiles to discover a connection between the dressmaker and the local magistrate. With this knowledge, she secures a promotion for her inept son. Tate next becomes involved with a baroness Honor Blackman who it turns out is breeding vicious, gigantic spiders. Tate's mother once again intercedes behind the scenes, and soon her son finds himself working for the President of a Latin American country -- and also involved with a revolutionary Shirley Jones, who is plotting to overthrow the President. Tate's mother again secretly comes to her son's aid, and as the film end, Tate has become the country's new ruler.

Critic Reviews for The Secret of My Success

Secret of My Success is an absurd, formless, shapeless affair that was handsomely photographed and well acted. Trouble with it is a script that wanders off in several directions resulting in a very uneven motion picture.

There are no featured reviews for The Secret of My Success at this time.

The Secret of My Success Quotes