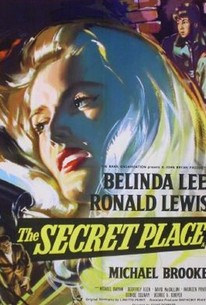 A young David McCallum heads the cast of the British melodrama The Secret Place. Set amongst the bombed-out buildings of London's East Side, the film concerns the misdeeds of a two-bit criminal gang headed by Gerry Carter (Ronald Lewis). In a fit of inspiration, Carter masterminds a meticulously planned diamond robbery, actually succeeding in swiping the precious gems. Unfortunately for the crooks, the diamonds accidentally come into the the possession of Freddie Haywood (Michael Brooke), a policeman's son. McCallum plays Mike Wilson, the sullen teddy-boy brother of Carter's girlfriend Molly (Belinda Lee), who tries to inveigle Freddie into giving up the diamonds.

George A. Cooper
as Harry

Wendy Craig
as Receptionist
View All

Critic Reviews for The Secret Place

The Secret Place is a modest production, but it develops conventional material with an encouraging sense of enterprise.

There are no featured reviews for The Secret Place at this time.