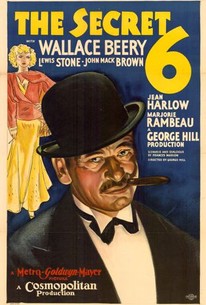 Filled with gritty gangster action and set within the depths of the Prohibition era, this crime drama was considered so violent that the entire state of New Jersey and other regions of the U.S. banned it. Featuring a ruthless crime lord loosely based on Al Capone, the story chronicles a vicious gang war between two rival gangs over control of a big city's illegal booze trade. The struggle begins when the city's most powerful gangster attempts to squash the efforts of a new and highly successful band of bootleggers.

Tom London
as Hood
View All

Critic Reviews for The Secret Six

The first pairing of Gable and Harlow is the highlight of this so-so film.

Rising star Clark Gable impressed the MGM studio bosses so much in this gangster pic, they gave him a long-term contract.

Audience Reviews for The Secret Six

Fast moving crime drama has a ripped from the headlines feeling and as usual from MGM a great cast. Jean Harlow, in her first year of stardom, is not quite at ease in front of the camera yet but exudes star quality. Clark Gable however, also in his first big year, is totally at home and gives a breezy assured performance.

A guy goes from a $35 a week job to being muscle for the mob to mayor to death row because of The Secret Six.Sounds like something straight out of a comic book don't it?