The Secret World of Arrietty2012 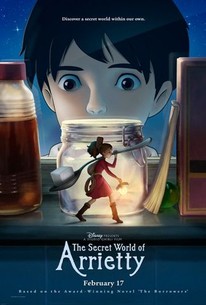 The Secret World of Arrietty Photos

Arrietty (Bridgit Mendler), a tiny, but tenacious 14-year-old, lives with her parents (Will Arnett and Amy Poehler) in the recesses of a suburban garden home, unbeknownst to the homeowner and her housekeeper (Carol Burnett). Like all little people, Arrietty (AIR-ee-ett-ee) remains hidden from view, except during occasional covert ventures beyond the floorboards to "borrow" scrap supplies like sugar cubes from her human hosts. But when 12-year-old Shawn (David Henrie), a human boy who comes to stay in the home, discovers his mysterious housemate one evening, a secret friendship blossoms. If discovered, their relationship could drive Arrietty's family from the home and straight into danger. -- (C) Disney

News & Interviews for The Secret World of Arrietty

View All The Secret World of Arrietty News

Critic Reviews for The Secret World of Arrietty

It's very pretty (plus a song that is like a gumdrop melting in your ear). Girls may enjoy the sweet, rather wistful story more than most boys.

What is so bewitching about the mostly static backgrounds in Arrietty is that they can be oxygenated at will by the smallest instance of judiciously placed movement, such as a single fluttering ladybird or a pair of jaunty butterflies in the foreground.

Arrietty is a fresh take on Mary Norton's classic The Borrowers, with animated artwork that will have adults enchanted and children gripped.

The fresh and simple story will win its share of young fans, though it lacks the disturbing adult elements might have attracted older audiences.

[The film] pulses with feeling for childhood and nature and develops a surprising amount of suspense considering it takes place around a single suburban home.

This divine hand-drawn animated adventure took my breath away on more than one occasion, and by the time it came to an end all I wanted to do was run up to the projection booth and make the theatre start it over from the beginning.

An oasis of calm in the normally hyperactive world of toon entertainment.

If you've never found yourself watching a Studio Ghibli film, then you owe it to yourself to do so.

Children will very much entertained by all that is going on here. It has enough fun and comedy along with a great sense of adventure through the film.

The movie is a charming and slow attentive study of a friendship that teaches two budding youths, albeit of varying sizes, to learn trust, choose fearlessly and keep open hearts.

Sometimes it is good to just sit back and have a calming slice of life story.

So grounded that it makes its premise seem almost entirely plausible, and it makes it seem like even the smallest childhood fantasies might be real.

Johnny Gayzmonic
Fanboys of the Universe
View All Critic Reviews (152)

Audience Reviews for The Secret World of Arrietty

Japanese version of the Borrowers.

The stories of the little people was originally conceived in the book series "The Borrowers" about a group of tiny people who would "Borrow" small things from people that they need. 50 years after the novel was written, Director Hayao Miyazaki decided to do his take on this story. The story is about a young boy with medical problems named Shawn (David Henrie) being sent to his moms childhood house where she was told stories of small people who lived under the floor. He sees a strange creature when he is outside when he first arrives and thinks it looks like a little person. This creature ends up actually being a little person, a 14 year old girl named Arriety (Bridgit Mendler) who lives with her two parents (Will Arnett and Amy Poehler) who are borrowers who are small people who "Borrow things such as soap, cookies, and other small things that humans don't need when they disappear. Shawn ends up seeing Arriety on her first night of "Borrowing" and his curiosity was picked very far when she drops sugar in his room and he drops it off in the hole near her house. Arriety questioning this is told not to take the sugar because her father thinks its a trap but she sneaks out and ends up becoming friends with Shawn. Like many of Ghiblis movies as I said before, usually get heavily Disney associated actors such as David Henrie from Wizards of Waverly Place and Moises Arias who was on Hannah Montana. But this movie also like Ghiblis other movies get moderately big actors or much older actors, such as in this film they got Carol Burnett, and Amy Poelher and Will Arnett. All of them do regular great jobs and one actor I think does the best job overall is surprisingly David Henrie as Shawn. He has such an innocent and monotone voice that it is impossible not to feel sorry for him when you find out about what is wrong with him and you feel horrible for all the things that are happening to him. He's both a sympathetic character and a very emotional character, and Henrie pulls this off flawlessly well. Bridget Mendler does a good job as Arriety, being sweet and pulls off the teenage girl getting to figure out the big world very well. Arnett and Poelher both do good as Arriety's parents and it shows due to these two being married in real life and you believe they do care for Arriety and are both believable as these two characters. Carol Burnett is shockingly not that memorable in this movie, she plays the character of Hara, a woman who takes care of Shawn but is obsessed with catching the little people. Maybe its because the character is really not developed that well, but Burnett doesn't really have much to work with with this character in the film, unlike the other elderly actresses that Miyazaki has chosen before such as Suzanne Pleshette in Spirited Away or Lauren Bacall in Howl's Moving Castle. The animation, again like all of Miyazaki's other animated pictures is incredible, and for a movie with perspectives of smaller people to much larger people and animals leads to some very good eye candy to see in a Miyazaki movie. But other than that there isn't much really to talk about in terms of the animation. One thing I will say about this movie is that is quite possibly one of the emotional films that I've seen in a while, and one of those reasons is because of the music, the music in this movie are brilliantly done and the film has little to none of it, but they know when to use it to the films advantage, and it works incredibly well when it is used. Using piano music about 80% of the time also helps. Overall this is so far the best film that I've seen this year and it is definitely a wonderful film to go see, and it is one of the few movies to make me cry at the end, and it is quite possibly Studio Ghiblis most well told story out of all their films. My only problem I have with this movie is that the film does have a somewhat slow pace for a animated movie especially for a 90 minute animated film, but everything is all done extremely well and it is definitely one of Ghiblis best. Review originally written 2/26/12

While not entirely a Miyazaki film, he is only credited as the co-writer here, it definitely carries some of his signature themes and would nestle up well with the other Ghibli films that you have on your shelf. It focuses on the plight of Arrietty, a young woman who is one in a long line of little people known as "borrowers", as she timidly navigates her way through this big, and mean big, scary world. Along the way she befriends a sickly human boy named Sho, who borrowers are supposed to be very leery of. and together they form an unlikely kinship that gives them each the fortitude to fight for their very survival. Having the film centered around a very little girl isn't only just a fun way to tell a story, it also cleverly elaborates on the fears of being young and making your own stamp on this world. There are just so many potential dangers out there that finding your place in it can be quite a daunting task. Unfortunately for adults like Haru, a maid hellbent on discovering these little people. many adults no longer desire to embrace the magical nature of the world around them. She only wants to exploit it to defend her own sanity in the eyes of her peers. However, other then a clever way to tell a coming of age story, this film really lacked a spark. It lacked vitality. The story at times felt like it was moving at a snail's pace and I wished that director Hiromasa Yonebayashi would have spent a little more time on fleshing out either Arrietty or Sho. Focusing on both of them seemed to shortchange any chance of really getting me involved in these character's lives. Another problem that I had with the film, aside from the fact that they call themselves "borrowers" even though it is clear they have no intention of returning the products they STEAL, was the music. I have a feeling that during its conversion to the English language, subtlety got lost in translation. The music is often so on the nose tonally and lyrically that it was almost comical. When someone is sad, the music quickly sweeps in with some bad Lifetime Network score. I'm not necessarily blaming the filmmakers on this one, but someone along the line really blew it. It is starting to get redundant in my reviews, but seriously the animation is astounding. It is especially impressive here as this film features a great deal of action. The action is accompanied by an excellent sound design. As the film frequently changes perspectives from the little people to the full sized human brings, so does the sound and it is a really smart and exciting touch. So while not the most groundbreaking film, like all Ghibli, it is smart, visually breath-taking, and completely worth your time.

The Secret World of Arrietty Quotes