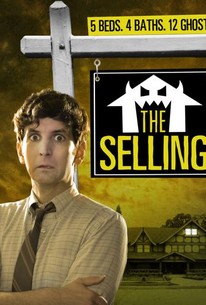 An impulsively honest real estate agent learns discovers that selling a haunted house is the least of his worries when the phantom occupant decides that a human body offers better shelter than a creaky old house. Richard Scarry is desperate. His mother is in the hospital for a serious ailment, and in order to pay the bills he invests in a house he plans to flip for a tidy profit. When a stubborn ghosts drives away all potential buyers, the frustrated agent enlists the aid of his easily frightened best friend, an architecture-loving exorcist, and a waitress with extensive knowledge of the spirit realm to cleanse the property. Richard's dilemma goes from bad to worse, however, when the malevolent entity decides that possession is more fun than haunting, and literally gets under his skin to stir up some supernatural mischief.

Ross Hellwig
as Ted
View All

Critic Reviews for The Selling

There are consistent, legitimate laughs throughout, and, especially as the movie builds and progresses towards the climax, some solid ghost story action in the midst of all the humor.

Audience Reviews for The Selling

There are no featured audience reviews yet. Click the link below to see what others say about The Selling!