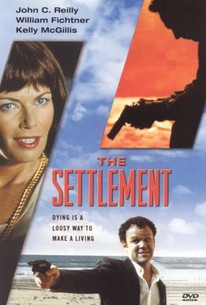 In The Settlement, Pat (John C. Reilly) and Jerry (William Fichtner) work on the fringes of the insurance industry in what are called "viatical settlements," which allow terminal patients the option of cashing in their life insurance policies before death for a reduced payment. In the 1980s, with AIDS cutting short what might have been long and healthy lives, business is booming for Pat and Jerry's firm, Viable Settlements, Inc. But a few years later, improved treatments are keeping the terminally ill alive much longer -- and that's bad news for Viable Settlements, which is now on the brink of bankruptcy. When Pat and Jerry meet the beautiful and mysterious Barbara (Kelly McGillis), no one's sure if she's good or bad news. The supporting cast includes David Rasche and Dan Castellaneta. The Settlement was screened at the 1999 Los Angeles Independent Film Festival.

Critic Reviews for The Settlement

The Settlement doesn't settle much in the way of morality, but it has its moments of glee.

Audience Reviews for The Settlement

There are no featured audience reviews yet. Click the link below to see what others say about The Settlement!