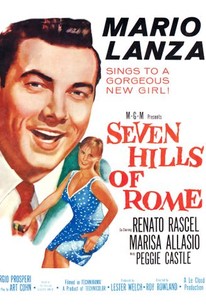 Roy Rowland directs the musical Arrivederci Roma (The Seven Hills of Rome), intended as a showcase for the talents of famous operatic tenor Mario Lanza. American singer Marc (Lanza) gets into a fight with his girlfriend, Carol (Peggie Castle). He follows her to Rome in an attempt to win back her affections. On the train, he meets an Italian woman named Rafaella Marini (Marisa Allasio), who is supposed to be moving in with her uncle. Marc gives her a ride and they discover that the uncle has left for South America. With nowhere to go, Rafaella stays with Marc and his cousin Pepe Bonelli (Renato Rascel), which leads to eventual romance. The narrative allows for Lanza to do his serviceable impressions of popular singers like Perry Como, Dean Martin, Louis Armstrong, and many others.

Critic Reviews for The Seven Hills of Rome

I don't happen to enjoy Mario Lanza's brand of hammy, self-infatuated vocalism, and his acting is much worse than his singing.

Audience Reviews for The Seven Hills of Rome

Mario's second to last film finds him in looking rough around the edges but sounding glorious. Trite story line is supplemented by breathtaking views of Rome.

The Seven Hills of Rome Quotes