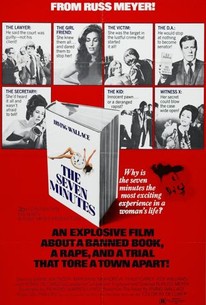 Freedom of speech is the issue at the center of this drama from Russ Meyer (it was the only serious drama the former "King of the Nudies" ever made). The story is based on an Irving Wallace novel and centers on an actress who assumes a penname and writes a pornographic novel. The novel causes great controversy. When a bookstore owner is arrested for selling the spicy tome to a teen-ager who is later charged with rape, the actress decides to publicly acknowledge that she wrote it.

Wolfman Jack
as Himself

Critic Reviews for The Seven Minutes

There are no critic reviews yet for The Seven Minutes. Keep checking Rotten Tomatoes for updates!

Audience Reviews for The Seven Minutes

A Russ Meyer movie, dull? Hard to believe unless you've seen "The Seven Minutes." Adapted from an Irving Wallace novel, this courtroom drama is an attempt at straightforward storytelling with a minimum of Meyer's usual titillation and cheap humor. The plot's censorship theme obviously was a heartfelt issue for him, but bland lead actors, a marathon running time by Meyer standards (110 minutes) and a tedious middle stretch leave one hungry for more bouncing breasts. The film's title refers to a fictional novel written by the mysterious J.J. Jadway. The sexually explicit book -- the title refers to the average time required for a woman to reach orgasm -- was published back in the '30s and has been extensively banned. Now the book is pivotal in two pending cases: a mousy bookseller accused of peddling pornography and a young misfit charged with porn-induced violence. The intersection of these cases is somewhat confused, but most of the action follows a handsome, maverick lawyer (Wayne Maunder) as he collects evidence and romances a woman (Marianne McAndrew) from his client's upper-crust family. Along the way, he encounters an intriguing cast that includes a pre-stardom Tom Selleck, John Carradine (one throwaway scene as a drunk Irish poet), Yvonne De Carlo ("Munsters" fans will be quite pleased with her flashy role), Wolfman Jack and familiar character actor Harold J. Stone. There's also a truly bizarre appearance by Berry Kroeger, portraying a witness described as a "thinking man's faggot." "The Seven Minutes" has a strong ending, but it's not enough to forgive stale dialogue and an overly complex story that soon tests one's patience.