The Shadow in the North2007 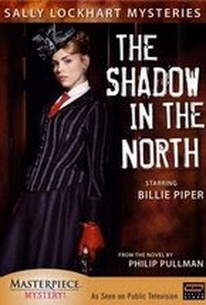 The Shadow in the North Photos

A financial consultant enlists the aid of a skilled detective in tracking down the missing money of a wealthy client, in the process stumbling into a sinister plot hatched by a ruthless industrialist in this mystery adapted from author Philip Pullman's popular novel of the same name. The year is 1878, and Sally Lockhart (Billie Piper) has just gone into business as a financial consultant. Sally's job quickly becomes complicated, however, when she receives news that the unexpected collapse of the Anglo-Baltic shipping line has cost her client Miss Walsh a fortune. Determined to discover why so many ships on the Anglo-Baltic line have vanished without a trace and hopefully get Miss Walsh's money back in the process, Sally calls on her close friends Frederick (J.J. Field and Jim, who have recently opened their own detective agency. Their first mission is to discover the fate of the Ingrid Linde, a sizeable steamship that simply disappeared. It seems that a stage magician named Alistair MacKinnon may somehow be involved in the disappearance of the Ingrid Linde, but why has he become the target of thugs, and what's his connection to a psychic medium rumored to be tapping into unsavory business dealings? Their investigation eventually leading them to cruel industrialist Axel Bellmann, the sleuthing trio soon discovers that Bellmann's highly successful business is built on a dark and sinister secret. ~ Jason Buchanan, Rovi

Critic Reviews for The Shadow in the North

There are no critic reviews yet for The Shadow in the North. Keep checking Rotten Tomatoes for updates!

Audience Reviews for The Shadow in the North

There are no featured audience reviews yet. Click the link below to see what others say about The Shadow in the North!

The Shadow in the North Quotes