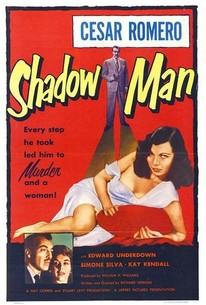 Shadow Man was one of several British films released stateside in 1953 by Lippert Productions. Cesar Romero play Luigi, a casino owner whose former girlfriend (Simone Silva) is murdered. Not surprisingly, suspicion falls upon Luigi. Also not surprisingly, he decides to circumvent the law by bringing in the killer himself. One of the incidental pleasures of Shadow Man is the presence of the delectable Kay Kendall, on the threshold of her greatest screen fame. Based on The Creaking Chair, a novel by Laurence Mynell, the film was originally released in Great Britain as Street of Shadows. ~ Hal Erickson, Rovi

Critic Reviews for The Shadow Man (Street of Shadows)

Audience Reviews for The Shadow Man (Street of Shadows)

Ordinary low budget noir. Kay Kendall is beautiful but wasted, this was made before her brief heyday cut short by her tragic death.