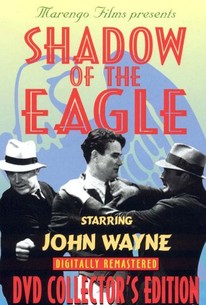 Mascot produced their serials fast and furious with little concern for believability, acting prowess, or technical niceties. Shadow of the Eagle is neither the best nor worst of the bunch, but rather typical of the company's hit-and-miss methods. The acting is occasionally downright embarrassing -- and that includes a very young John Wayne in the starring role -- but the fisticuffs are fast and plentiful, and the plot, such as it is, moves forward at a fast clip. The Mascot writers once again turn to trickery in order to conceal the identity of the mystery villain -- including having a different actor providing a voice-over -- but that is just par for the serial course. Comedy is provided by the carnival performers, but it quickly becomes grating, especially a running joke which has the circus midget (Little Billy) constantly mistaken for a child by the typically bone-headed cops, whom the circus performer refers to as "flatfooted palookas."

Edmund Burns
as Clark
View All

Critic Reviews for The Shadow of the Eagle

A typical action serial from Mascot, that held my interest only because of John Wayne.

There are no featured reviews for The Shadow of the Eagle at this time.

The Shadow of the Eagle Quotes