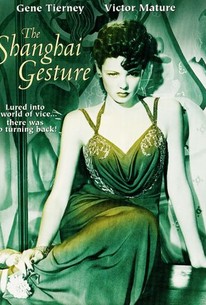 Josef von Sternberg made his first return to exotic Shanghai since 1932's Shanghai Express in this baroque conflagration, based on a 1925 play by John Colton that required 30 revisions before it was sufficiently sanitized to pass muster with Hays Office censors. The film takes place in the gambling den of Mother Gin Sling (Ona Munson), who finds her casino threatened with closing by stuffed shirt English financier Sir Guy Charteris (Walter Huston). Gin Sling knows that the key to keeping her casino open is to dig up some dirt on Sir Guy, and it's quick in coming. She finds that Sir Guy was compelled to leave China in a hurry some time in the past, stealing his wife's money and plotting to kill her. Sir Guy ended up abandoning his wife in China and leaving her with an infant daughter. She also finds out that Sir Guy's grown-up daughter, Poppy (Gene Tierney, is a frequent and deeply indebted guest of Gin Sling's casino. Gin Sling is now ready to blackmail Sir Guy into keeping her casino open. He tracks down his daughter and tries to convince her to leave town. But Poppy refuses to budge, having fallen in love with Doctor Omar (Victor Mature).

Leyland Hodgson
as Ryerson
View All

Critic Reviews for The Shanghai Gesture

A delirious masterpiece of decadence and sexual depravity.

Sternberg was gifted at capturing the feel of an exotic city from a regular sound stage, and he doesn't slouch here.

Audience Reviews for The Shanghai Gesture

Film Noir at its Best.

could you imagine rhet butler's favored blonde prostitute belle walting in "gone with the wind" impersonating a chinese dragon lady? that would happen under the directional trademark of josef von sternberg. ona munson plays the casino-owner mother "gin sling" in shaghai of china, and she schemes to claim her retribution upon her primary past fued from the new-arriving official sir guy charter. meanwhile she ensnares a young beautiful dame who calls herself poppy smith(a still burgeoning gene tierney) into the allure of the arabian giglo-poet omar(victor mature)....maliciously she intends to corrupt the girl into further deprivity by the thrills of gambling and sexual slavery. gin sling proceeds her conspiracy with resourceful levels to settle her so-called former debts. gene tierny luminates with brightful glamour in the outset with her flighty manners, and you could forsee a future major star then while ona munson endeavors herself at her perverse chineseness with her stuck-out cheekbones and the twisted slanted eyes contorted by her straight-lined raising eyebrows. the cosmetics of mother gin sling is literarily a grostesque from caucasion's stereotyped image upon a dragon lady magnified over a thousands times to create an imaginary monstress. maybe it's really histrionic but it's certainly attention-grappling and definitely not dull to watch. a ultimate realization of the best camp! the background sceneries appear engrossingly campy with all the absurd chinese exotica as if von sternberg collects all the eccentric antics of china to dispatch them together to conjure up an aura of lush nightmarish foreign land with creeps and living wax figures of "caucasian chinese"....and the script is written upon the occidental concepts of some incomprehensible chinese conventions as if it's strutting its enormous knowledge on chineseness, such as the elder china-man with five wives who flaunts his acquired conceptions upon women(another white chinese imatation with types on his eyelids) or gin sling's remark of filial piety....and gin sling likes to speak with her sentence began as "we chinese...." but is "shanghai gesture" derogatory to chinese? apparently not. how could it form any harm to the china image since it's so obviously fake? just like the mythical theme of arabian nights, you could gallope wild in your most wanton fantasies of exoticism. contrarily, it's well-depicted pulp fiction of the raging sound of minority races in a very idiocyncratic way since it's a getting-even tale of a grudgy chinese woman who battles her conscienceless caucasian lover who tramps her with severe exploitations. some might criticize the asiastic villainy in early hollywood cinema was uglifying those oriental races, but under another spectacle, it's more aloofly characteristic to be raw and untamed....the contemporary asian castings as user-friendly adapters to the occident is lackluster and characterless in comparasion with the ancient edginess of recalcitrants since asiastic races were still considered mean, insidious people in 18th century novels....on the other hand, what's so cool about chineses (or asiastic) being dosmeticated as the meek ones like nowaday trends of globalization?