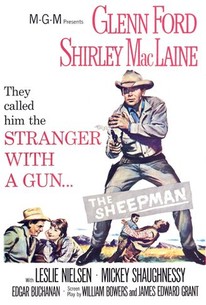 The Sheepman was touted as a comedy by some of MGM's publicity people. It really isn't, but this western does have its lighthearted moments. Glenn Ford stars as a hard-bitten sheep farmer, running up against the opposition of cattle ranchers. Shirley MacLaine is a no-nonsense frontier girl who becomes the bone of contention between Ford and cattle baron Leslie Nielsen. Ford is able to get a leg-up in the community by humiliating Nielsen's top gun (Mickey Shaughnessy) in public. The range war comes to an end when Ford and Nielsen go one-to-one. Because The Sheepman didn't do well in its initial engagements, MGM reissued the picture under the more aggressive title The Stranger With a Gun.

Tom Greenway
as Rancher
View All

Critic Reviews for The Sheepman

Probably the best Western I've seen in months, if not years.

The always reliable Glenn Ford is perfect for the part, but the film is stolen by the shifty W.C. Fields windbag misanthropic comic character portrayal by Edgar Buchanan.

Audience Reviews for The Sheepman

There are no featured audience reviews yet. Click the link below to see what others say about The Sheepman!