The Shepherd of the Hills1941 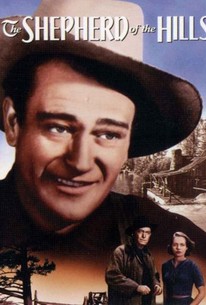 The Shepherd of the Hills Photos

Harold Bell Wright's bestselling novel The Shepherd of the Hills had been previously filmed in 1919 and 1928 before Paramount offered the first talkie version in 1941. In one of his least typical roles, John Wayne plays a young Ozark backwoodsman forsworn to kill his father, who years earlier abandoned his mother. Against this personal crisis is played the larger drama of outsiders who threaten to push Wayne's friends and family off their land. Fate plays a hand when a mysterious stranger wanders into the community. Not at all the action picture one would expect from star John Wayne and director Henry Hathaway, Shepherd of the Hills takes its own sweet time, unfolding its story in a leisurely pace befitting its slow-moving characters. The film's rich Technicolor photography adds to the restfully rustic ambience of this unusual entertainment..

Charles B. Middleton
as Blacksmith

Hank Bell
as Man with Mustache

Critic Reviews for The Shepherd of the Hills

Among the films considered as true jewels, that deserves all kinds of awards and honors. [Full review in Spanish]

The Shepherd of the Hills doesn't always work. But when it does, it's as pretty a bluegrass poem as has ever been written.

One of John Wayne's better films before he became a star due to Henry Hathaway's solid direction, Duke's own acting, and strong supporting cast.

Audience Reviews for The Shepherd of the Hills

The Duke is a bit more introverted in this than was usual, delivering a quiet strong piece of work. Solid supporting work from the rest of the cast and beautiful Technicolor photography.

The Shepherd of the Hills Quotes