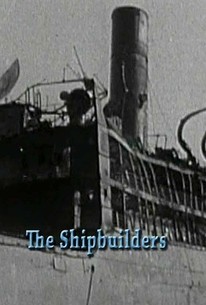 The Shipbuilders is a rare film of true merit from prolific British "quota quickie" director John Baxter. Clive Brook heads the cast as the owner of a shipbuilding firm, presently dedicated to the War effort. Though naturally concerned that his business will flag once the war is over, it is shown that Brook has nothing to worry about, so long as diligent, patriotic men like riveter Morland Graham are on his payroll. The film's message is clear: While it's important to think of one's service to the present National Crisis, it is equally important to take the Future into consideration. Actual footage shipbuilders at work give this hastily assembled patriotic exercise a veneer of reality. ~ Hal Erickson, Rovi

Critic Reviews for The Shipbuilders

There are no critic reviews yet for The Shipbuilders. Keep checking Rotten Tomatoes for updates!

There are no featured reviews for The Shipbuilders at this time.